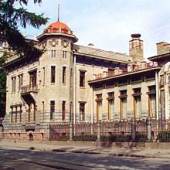 This museum's remit is to trace the political history of the country right up to the present, and its collection is always kept up to date and relevant.

The building which houses the museum itself played a significant role in history. This attractive art nouveau mansion was originally built for Mathilda Kshesinskaya, the prima ballerina at the Mariinskiy before the Revolution, and Nicholas II's mistress before he became Emperor. Designed by Alexander von Gogen and completed in 1906, the asymmetrical design combines an enfilade of reception rooms with a winter garden and rotunda. The exterior comprises windows of different sizes set in walls covered with various materials including granite, brick, majolica and decorative metals.

In 1917, the building was seized by the Bolsheviks and turned into their headquarters in the city. It became the centre of their revolutionary activities, and Lenin made a historic speech from one of the balconies after his arrival in the city. It was later passed through a number of organizations, before eventually becoming the Museum of the Revolution in 1957.

The exhibition is based on the collection of the now-defunct Museum of the Revolution, which contained artifacts gathered by key players in the Revolution long before the museum itself was actually established, including their own personal effects, documents, posters, pamphlets, and banners. Of particular interest are the belongings of politicians, statesmen, scientists and military leaders, among them the 19th century liberal Sergei Witte, Nicholas II, Lenin, Gorbachev and Yuri Gagarin.

At the beginning of the 1990's, the museum was renamed the Museum of Political History, and the displays were radically reworked to reveal much of the secret history of the Soviet Union, with a new ethos aimed at dispassionately telling the truth about even the most recent history. The museum's collection embraces a broad time spectrum, from the reign of Catherine the Great (the second half of the 18th century) to the political climate in contemporary Russia. Among nearly 500,000 exhibits on display here, there is a rich collection of original documents including a signed decree from Napoleon and the correspondence of Mikhail Gorbachev.

Contemporary history is also charted with such artifacts as the video camera used by Mikhail Gorbachev to record his messages to the nation during the August Putsch of 1991 and a piece of the Berlin Wall, among many other unique exhibits.