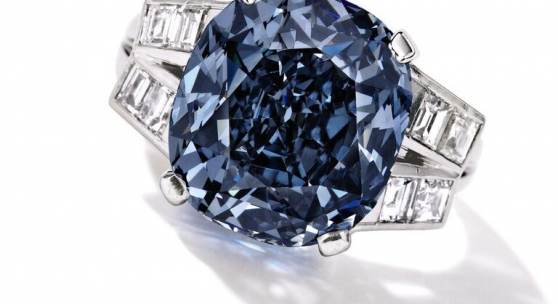 NEW YORK, 18 March 2016 – Sotheby’s 19 April 2016 auction of Magnificent Jewels in New York will be led by a 9.54-carat Fancy Deep Blue diamond ring owned by Shirley Temple throughout her long life – from a child star lifting America’s spirits out of the Great Depression, to her decades of service as an American diplomat (then Shirley Temple Black).

Shirley Temple’s father purchased the diamond ring in early 1940, around the time of her 12th birthday as well as the premier of her film The Blue Bird. That film may have served as inspiration for purchasing a blue stone specifically, as colored diamonds were not as coveted at the time as they are in today’s market*. The traditional cushion-cut stone remained in Shirley Temple’s collection until her passing in 2014, and it is offered this spring in its original Art Deco-inspired setting.

Temple’s father paid $7,210 for the ring in 1940. The 9.54- carat Fancy Deep Blue, Potentially Internally Flawless, VVS2 clarity diamond ring now comes to auction at Sotheby’s this April with an estimate of $25–35 million**.

Gary Schuler, Co-Chairman of Sotheby’s Jewelry, Americas, said: “It’s remarkable to have one stone illustrate the dramatic shift in attitude towards colored diamonds over the course of the last century. Today we recognize these stones as the definition of rarity, and they are eagerly sought-after in our current market for that very reason. The Shirley Temple Blue in particular has a traditional cushion cut that gives it a certain softness, charm and personality, and its saturated, Fancy Deep Blue color imbues it with a mesmerizing oceanic quality.”

Frank Everett, Sales Director of Sotheby’s Jewelry Department in New York, commented: “It’s a privileged occasion when we are entrusted with a stone of such exceptional quality and rarity. It’s rarer still that a stone would tell as compelling a story as The Shirley Temple Blue. Shirley Temple helped to lift America’s spirits out of the Great Depression, and served her country in many capacities throughout the remainder of her life. Her ring and its original Art Deco setting recall a time when she was nothing short of the biggest movie star in the world.”

SHIRLEY TEMPLE – FROM AMERICA’S LITTLE DARLING TO AMERICAN DIPLOMAT
Born on April 23, 1928, Shirley Temple quickly rose to an unprecedented level of stardom and became a lasting American icon. After Fox Films songwriter Jay Gorney caught a glimpse of Temple dancing in a theater lobby, he was instantly hooked. Temple was signed to Fox Films and was offered a role in Stand Up and Cheer!, which premiered in 1934. It was during this time at the height of the Great Depression that Temple’s star exploded – with her innocence, cheerful can-do attitude and wholesome family appeal, Temple filled millions of fans with feelings of hope and comfort that seemed beyond grasp in reality.

The first of her many films, Bright Eyes, featured the timeless jingle Good Ship Lollipop – a smash hit that sold over 500,000 copies of sheet music upon its release. By 1940 Shirley Temple’s face and name were considered a national treasure. She was the subject of a Salvador Dalí painting, animated alongside Donald Duck, immortalized in front of Grauman’s Chinese Theater and appeared in ads for countless brands and products.

In 1969, Temple (then Shirley Temple Black) was in a different form of spotlight when President Nixon appointed her U.S. Delegate to the 24th United Nations General Assembly. Later presidents followed suit: President Ford appointed her United States Ambassador to Ghana in 1974, and later named her the first woman Chief of Protocol of the United States, while President Bush Sr. named her United States Ambassador to Czechoslovakia, where she served from 1989 to 1992 – during which time she witnessed the Velvet Revolution.

As an adult, Shirley Temple Black made sure to remind the women who grew up alongside her of the power of their voices. A 1972 breast cancer diagnosis led the star to have a mastectomy, and just a few days after surgery she held a news conference from her hospital bed, reminding women that only they held the power to make their own medical decisions. More than 50,000 letters and cards flooded her hospital room, and to this day she is seen as one of the first women who spread the word of early detection and prevention of breast cancer.

*BLUE DIAMONDS AT SOTHEBY’S
In November 2015, Sotheby’s set a new world auction record for any diamond or any gemstone – as well as a record price-per-carat for any diamond or gemstone – when a 12.03-carat Fancy Vivid Blue diamond sold for $48,468,158 ($4,028,941 per carat) in Geneva. Previously called the Blue Moon diamond, the magnificent stone was purchased by a private collector from Hong Kong who renamed it The Blue Moon of Josephine.

The previous world auction record for any blue diamond was established by Sotheby’s in November 2014, with the sale of the Zoe Diamond: a Fancy Vivid Blue Diamond weighing 9.75 carats that was offered from the collection of Mrs. Paul Mellon. Its final price of $32,645,000 ($3,348,205 per carat) at the time also marked a new a world auction record per-carat for any diamond.