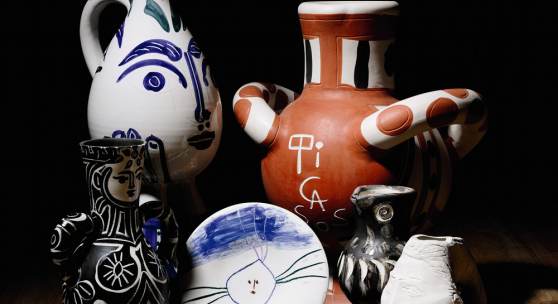 On 5 April 2016 in London, Sotheby’s will hold a sale of Important Ceramics by Pablo Picasso. From 1947 to the early 1970s, Picasso's engagement with ceramics resulted in a body of work created with the same passion as his paintings, sculptures and prints. Characterised by a remarkable sense of freedom and innovation, the comprehensive group of over 230 lots ranges in estimate from £800 upwards to £80,000.

It was in the summer of 1946 that Picasso first met Suzanne Douly and Georges Ramié in their now famed Madoura studio in the town of Vallauris in southeast France, which they had opened in 1938. During his chance meeting with the Ramiés, he was so excited by ceramic as a medium that he immediately sat down on a bench and spent the afternoon modelling small clay animals in his hands. The experience was to prove deeply compelling to Picasso and he became attracted by the artistic possibilities and challenges that clay offered. Running concurrently with his other work, his ceramics allowed him a rich interchange between ideas about imagery and form.

Taken with the idea that anyone could buy, use or even decorate their homes with them, Picasso was persuaded by Suzanne Ramié to make numbered editions of some of his ceramics. These multiples, of which there are 633, were usually made in editions of 25 to 500. The editions were either impressions (empreintes originales) taken from moulds worked on by Picasso – some of which were left unpainted or were worked on by Madoura staff following original Picasso designs – or authorised replicas of his original designs.

Picasso reinvigorated the tradition of ceramics with an inexhaustible array of forms, techniques and imagery, and through his editions he shared his vision with the world.