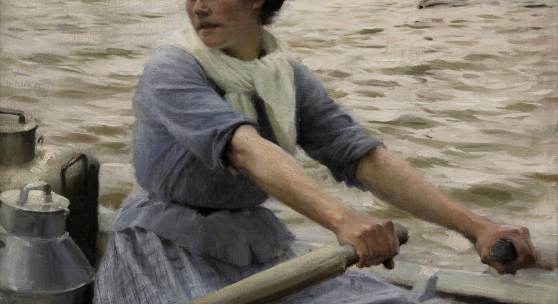 Sotheby’s in London will offer one of the most important works by Finnish artist Albert Edelfelt to be rediscovered in recent times. Though recorded by Bertel Hintze in his Edelfelt monograph of 1944 and illustrated on the cover of volume three, La laitière has been unseen by the public since it was exhibited in Helsinki in 1892. The painting comes to the market from a French private collection, having remained in the same family for over 75 years. Estimated at £300,000-500,000, La laitière – an atmospheric evocation of archipelago life in Haiko, where the artist kept a summer house – will be offered in Sotheby’s sale of 19th Century European Paintings on 25 May 2016.

Claude Piening, Head of 19th Century European Paintings, Sotheby’s London, commented: “It is always thrilling when long-lost masterpieces such as this come to light. La laitière, hitherto known only from the 1892 black and white photo published in Hintze, was likely sold directly to a French collector soon after it was completed in 1889, at a time when Edelfelt was spending time between Paris (to where he had moved in 1874) and Finland. In other words, it may have remained in France for the last century, and its re-appearance on the market now is an exciting moment for Finnish art.”