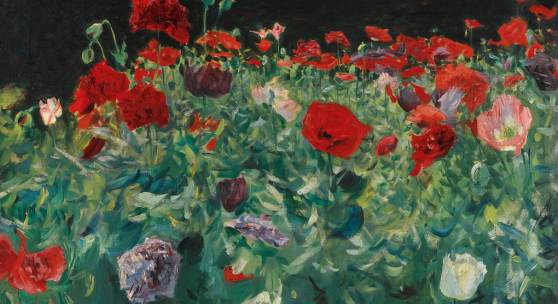 NEW YORK, 28 April 2016 – Sotheby’s spring sale of American Art on 18 May 2016 includes works by some of the most iconic names in the category. From John Singer Sargent’s striking Poppies (estimate $4–6 million), to Norman Rockwell’s remarkable 1949 Post cover Road Block (estimate $4–6 million), the sale presents a range of styles and genres from the 19th and 20th centuries. Highlights from the sale will be on view at Sotheby’s New York beginning 29 April, alongside Impressionist & Modern and Contemporary Art, with the full sale on exhibition beginning 14 May.

John Singer Sargent painted Poppies in 1886, (estimate $4–6 million) while at work on Carnation Lily, Lily, Rose, one of his most important works now in the collection of the Tate Britain. In the wake of the scandal caused by his daring portrait of Madame X, Sargent departed for England from Paris. He sustained a head injury while swimming on a boat trip along the Thames, and a friend brought him to Broadway, a nearby village in the English Cotswolds, to recuperate. He began working on Carnation Lily, Lily, Rose almost immediately, painting with a newfound freedom to portray anything that inspired him. The present work is likely the only surviving depiction of the splendid poppies he observed in a garden there, and was most recently included in the museum exhibition Painting the Modern Garden: Monet to Matisse, co-organized by the Royal Academy of Arts and the Cleveland Museum of Art.

The May auction also will offer Sargent’s Staircase in Capri (estimate $1.8–2.5 million), inspired by the artist’s travels to the Mediterranean island in the summer of 1878. The painting was first owned by Auguste Hirsch, a French artist with whom Sargent shared a studio in Paris in the late 1870s. It was later acquired by Pamela Harriman, who served as the United States Ambassador to France in the mid-1990s.

Among the most sophisticated and complex compositions Rockwell created for the cover of The Saturday Evening Post, Road Block (estimate $4–6 million) demonstrates the artist’s distinctive sense of humor and unparalleled gift for storytelling–two of the qualities that have incited comparisons between Rockwell’s work and filmmaking. Regarding his 1949 painting, Norman Rockwell bemoaned: “Why, oh, why do I paint such involved and complicated pictures?”

The May sale also will include Rockwell’s Hobo and Dog (estimate $1.5–2.5 million), sold by The Metropolitan Museum of Art. Appearing on the cover of The Post on October 18, 1924, it features one of Rockwell’s favorite models of the period: James K. Van Brunt.

Originally acquired directly from the artist by Philadelphia publisher Leonard E.B. Andrews in 1986, The Prussian (estimate $2.5–3.5 million) is one of the best works in a series of images by Andrew Wyeth that depict the now famous Helga Testorf, a neighbor who became his primary muse for over 15 years. Wyeth executed this highly finished work in drybrush, a technique that allowed the artist to capture Helga’s physical likeness with a keen attention to detail, and to achieve a rich and sculptural surface.

Embodying Thomas Wilmer Dewing’s inimitable and highly sophisticated aesthetic, The White Birch (estimate $2–3 million) is a sumptuous landscape that he painted while staying in the artists’ colony of Cornish, New Hampshire. The work displays the wide range of diverse aesthetic sources that Dewing drew from during this period, as well as his ability to synthesize them into an aesthetic all his own. This masterpiece, which comes to auction in an original frame designed by Stanford White, also boasts an impressive exhibition history, having been shown extensively across the United States, Russia and Japan.

Additional highlights are two paintings by the modern master Milton Avery being offered by the Art Institute of Chicago. Pink Cock (estimate $500,000–700,000), was completed in 1943, as the artist developed what is now considered his mature aesthetic. Lanky Nude (estimate $150,000–250,000), painted in 1950, represents Avery’s thoroughly modern interpretation of the traditional theme of the reclining nude. Both paintings showcase the unique manner in which Avery transforms a representational subject into an evocative, semi-abstracted arrangement of shape and color.