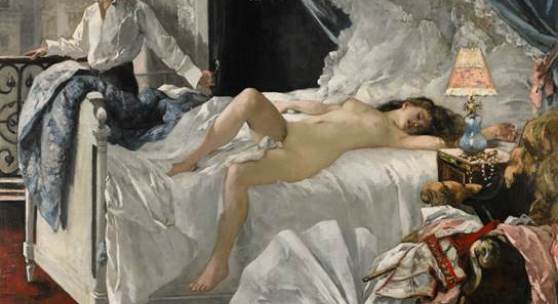 Aged twenty-six, French artist Henri Gervex experienced a succès de scandale in Paris in 1878 when he exhibited Rolla, his most famous work and an icon of late-nineteenth-century French art. The painting was pulled from exhibition at the Salon by the Surintendant des beaux-arts on grounds of immorality, and subsequently put on public view by a Parisian dealer for three months where, according to Gervex, ‘there was an uninterrupted procession of visitors with a queue of carriages backed up to the Opera’.

Sotheby’s will offer Henri Gervex’s réplique of Rolla, in which the artist faithfully reprises the detail and palette of the monumental original (now belonging to the French state, and a highlight of the recent Splendeurs et Misères exhibition in Paris and Amsterdam). Most likely painted on commission for a collector who wanted their own piece of the scandal, the painting is the first full version of Rolla to come to auction in over twenty-five years, and the only known variant of its size. The work will be offered in a sale of 19th Century European Paintings in London on 25 May 2016 with an estimate of £400,000-600,000 (€510,000-760,000).

Gervex took as his inspiration the eponymous poem of 1833 by Alfred de Musset and transposed the narrative into fashionable contemporary Paris, signalled by the wrought iron railings and view of the Haussmannised cityscape beyond. The painting depicts Jacques Rolla, a well-born bourgeois, who decides to spend his final night with the courtesan Marion, having squandered his fortune on a life of debauchery. Picturing the morning after, Gervex shows Rolla brooding on his fate and contemplating suicide by jumping from the window.

While Musset’s poem evoked a squalid and untidy interior, Gervex’s interpretation is altogether more chic, with a Louis XVI bed and luxurious fittings. The striking modernity of the painting and in particular the hastily-removed accoutrements piled up in the still life to the lower right, captivated viewers at the time. It was Edgar Degas, a friend of the artist, who had suggested to Gervex that he include these elements. The combination of the sumptuous dress and red corset – pulled open from the front, rather than untied carefully by Rolla from the back, the upside-down top hat, and suggestively protruding cane, appeared to tell viewers all they needed to know about the encounter. Gervex suggests that Marion was an independent and powerful ‘fille insoumise’ in a rich district of Paris, rather than one of the employees of the maison close brothels elsewhere, which were regulated by the state.

Although Rolla can be seen as the heir to Manet’s Olympia of 1865 or Nana painted the year before, the depiction of Marion herself was relatively uncontroversial, comparable to the multitude of academic nudes which graced the Salon walls and Gervex’s other Salon paintings of the 1870s. Gervex’s nude is almost a direct quotation of Alexandre Cabanel’s Birth of Venus (now in the Musée d’Orsay), a favourite of Emperor Napoleon III.