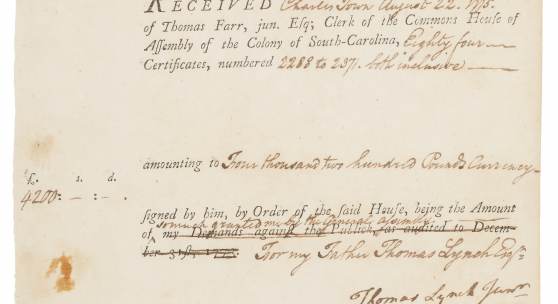 NEW YORK, 17 May 2016 – Sotheby’s is honored to offer two significant and foundational documents of the United States of America, the Emancipation Proclamation and the 13th Amendment. Both signed by the ‘Great Emancipator’, President Abraham Lincoln, these iconic documents represent crucial milestones in America’s movement towards the ideal expressed in the often-quoted line from the Declaration of Independence: “all men are created equal”. The Emancipation Proclamation and the 13th Amendment, offered together for the first time, will be cornerstones of the Two Centuries of American History: Highly Important Letters and Documents sale, to be held in New York on 25 May 2016.

Institutionalizing “All Men are Created Equal”: The Emancipation Proclamation
On 1 January 1863, President Abraham Lincoln “order[ed] and declare[d] that all persons held as slaves within said designated States and parts of States are and henceforward shall be free”. With this grand statement, President Lincoln began the process of institutionalizing emancipation, while immediately setting as many as 50,000 men, women and children free. With the stroke of his pen, he also transformed the mission of the Civil War, from one of the restoration of the Union to one of liberation of all.

The present copy of the Emancipation Proclamation (estimate $1,500,000/2,000,000) is a limited edition signed by Lincoln to be sold to support the Union cause. Conceived of by Charles Godfrey Leland and George Henry Boker, the documents were advertised for ten dollars each in the 17 June 1864 issue of Our Daily Fare, and sold at the Great Central fair benefiting the United States Sanitary Commission, considered a forbearer of both the Red Cross and the USO. The Lelend-Boker broadside, also known as the “Official Edition”, is the only printing with the full text of the Emancipation Proclamation signed by President Lincoln. It is also signed by Secretary of State William H. Seward, and authenticated by the President’s personal secretary, John G. Nicolay. This rare copy of the Proclamation is now only one of twenty-seven known to survive, nineteen of which are in institutions. Of the eight (including the present example) known in private hands, most are planned for donation.

Abolishing Slavery: The 13th Amendment
Declared by President Lincoln as “a king’s cure for all the evils”, the 13th Amendment signed on 1 February 1865 abolished slavery and involuntary servitude in the United States (estimate $2,000,000/3,000,000). As the first significant change to the country’s notion of civil liberties since the Bill of Rights in 1791, the 13th Amendment was the culmination of seventy years of political discord over the status of slaves. Beginning with the ‘Three-Fifths Compromise’ of 1787 and leading up to the Emancipation Proclamation, this historic document was revolutionary at the time, and remains pertinent today. This particular manuscript, one of fourteen manuscript copies signed by President Abraham Lincoln, his Vice President, Speaker of the House Colfax and, in this particular case, 36 senators, comes to Sotheby’s from The Gilder Lehrman Institute of American History.

The Gilder Lehrman Institute of American History is a New York non-profit founded by Richard Gilder and Lewis Lehrman, two passionate collectors of American manuscripts. Founded in 1991 with the dream of creating one of the most important repositories of American history documents, the Institute has grown to over sixty thousand individual items, with considerable strength in the Revolutionary, early national, antebellum and Civil War periods, as it incorporated both the personal collections of Mr. Gilder and Mr. Lehrman in 2001. The Gilder Lehrman Collection retains another Lincoln signed copy of the Amendment. The 13th Amendment is now being sold at Sotheby’s to benefit the Acquisitions Fund, so that the Institute may continue its mission of providing first-rate primary resources to students, teachers, historians and America history enthusiasts around the world.


Document signed in full ("Thomas Lynch Junr"), on behalf of his father, Thomas Lynch, Sr., then a South Carolina delegate to the Continental Congress meeting in Philadelphia. 100,000 - 150,000 USD
Sotheby’s Auktionshaus