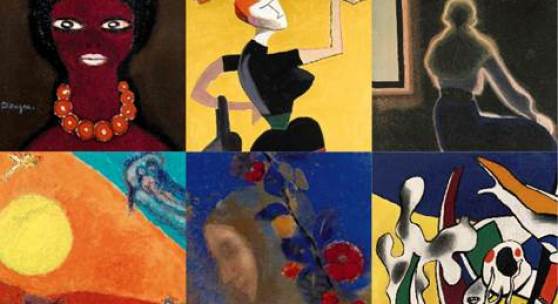 Paris, May 2016 – On 1 June, Sotheby’s France will hold its first Impressionist and Modern Art Sale of the year – bringing together a catalogue of works with powerful compositions in bright and luminous colours, with the spotlight on great masters of modern art including Fernand Léger, Marc Chagall, Kees Van Dongen, Léon Spilliaert, Odilon Redon and Man Ray.

Marc Chagall
Leading the sale will be two dazzling works by Marc Chagall's, embodying the quintessential poetry and lively palette of the Russian painter. The first deploys his talents as a colourist to marvellous effect. The southern light and vegetation bring out an airier, more voluptuous approach, where the magic of the colours intensifies with each memory and embrace. Following a spatial layout in oblique lines, unusual in Western art but frequent in Chagall, the chromatic palette of Repos dans le ciel multicolore, painted in around 1980 (estimate: €1,200,000-1,800,000) becomes expressionistic and lyrical.
Painted for the 1979 "Paris-Moscou" exhibition at the Centre Georges Pompidou in Paris, a few years before Chagall died, Les Mariés sous le baldaquin (estimate: €1,200,000-1,800,000) is a synthesis of all the artist's themes. This work with its sunny beauty, is a positive ode to joy in which the painter transcends the motifs of his youth. Here, earth and heaven merge in a yellow that evokes the gold backgrounds of the Renaissance and of Orthodox icons.

Fernand Léger
"The object is really the ‘subject’ of my easel painting. I took the object, I got rid of the table, and I placed the object in the air without any perspective or support." From 1926 onwards, Fernand Léger's major preoccupation was to remove all constraints from the object, and make it independent in relation to the figure. Painted in 1929, Composition d’objets, (estimate: €1,000,000-1,500,000) is a speaking illustration of this goal. One of a series known as "Objets dans l’espace" (1925-30), this work combines the human figure, objects and fragmented motifs.

Another major work by Léger to be offered, Peinture imaginaire (estimate: €1,000,000-1,500,000) is characteristic of the so-called "large format composition" period, where the artist favoured synthetic forms and primary colours. Between 1935 and 1940, Léger received several official commissions from the French State. This picture was part of a commission from the Ministry of National Education in 1938 for a fresco paying tribute to French aviation.

From an outstanding European collection, Portrait de femme, L’Egyptienne, painted in 1909 (estimate: €300,000-400,000) is a work by Kees Van Dongen that has never been exhibited or come on the market before. The rarity of its subject has produced a hypnotic composition echoing the words of Guillaume Apollinaire: "European and exotic in turn, Van Dongen has a personal, violent feeling for Orientalism. His painting often has a whiff of opium and amber."