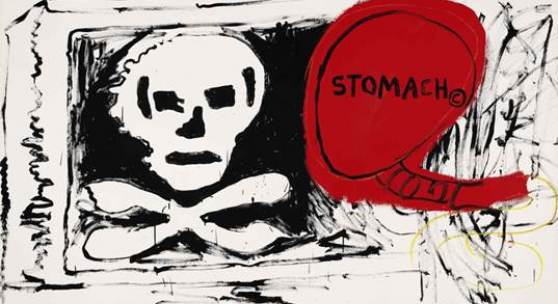 A MAJOR WORK BY KAZUO SHIRAGA
Elton John has chosen Sotheby’s France to sell a contemporary art work from his collection. On 7 June, a painting by two enfants terribles, Jean-Michel Basquiat and Andy Warhol, will be offered at auction. The catalogue features other artistic collaborations, between Zao Wou-Ki and Germaine Richier, where East meets West and primitive sculpture meets sensitive painting, and between Yves Klein and Gunther Uecker: two great artists who contributed to a dramatic change in contemporary creation. The sale will start off with a dazzling painting by Kazuo Shiraga. This first session, containing some forty lots, will be followed by a day sale on 8 June.

COLLABORATIONS BETWEEN LEADING ARTISTS OF THE 20TH CENTURY
Collection of Sir Elton John and David Furnish A joint work by two enfants terribles of the Eighties: Jean-Michel Basquiat & Andy Warhol

One of the most eagerly-awaited pieces in the catalogue is a monumental painting by Jean-Michel Basquiat and Andy Warhol from Sir Elton John's collection. In 2003, Sotheby’s London sold the contents of his apartment, to the great enthusiasm of numerous fans. Over the years, the British singer and his husband David Furnish have built up a large collection of contemporary art by iconic artists of the last five decades, including Willem de Kooning, Louise Bourgeois, Gilbert & George, Damien Hirst and Keith Haring, together with 7,000 photographs. Next November, an exhibition entitled A Radical Eye: the Sir Elton John Collection, will reveal 150 photographs from this outstanding collection at the Tate Modern. The British Pop singer met the inventor of Pop Art on numerous occasions, so it is hardly surprising that he bought several of his works.

Untitled, 1984-1985 (estimate: €700,000-1,000,000), is one of the finest examples. It is the outcome of the joint work between two 20th century geniuses. In 1980, in a café, Jean-Michel Basquiat was bold enough to approach Andy Warhol, whom he idolised, and who was then at the peak of his glory. Their collaboration began four years later. Basquiat, overwhelmed by his own celebrity, then saw Warhol as a protective alter-ego, while the creator of the Factory was captivated by the creative energy of his protégé. In the painting here, a Memento Mori, a recurring motif in Warhol's work, is juxtaposed with a bright red organ symbolising an endlessly renewed vital energy. The disenchantment of one enters into symbiosis with the obsessions of the other, paving the way to a fascinating dialogue.

When East meets West: Zao Wou-Ki and Germaine Richier Another amazing collaboration, with a meeting between East and West and two different media, painting and sculpture, is L’Echelle (estimate: €400,000-600,000), produced in 1955. This is literally a unique work.

Revolutionising contemporary creation: Yves Klein & Gunther Uecker Anthropométrie, Sans Titre (ANT 135), executed in 1961 (estimate: €1,100,000-1,500,000) comes from the former collection of Günther Uecker, a major 20th century artist and brother-in-law of Yves Klein, to whom the painter dedicated the work. Fired by the same ideals, Klein and Uecker took part in the ZERO group founded by Heinz Mack and Otto Piene in 1958.

Kazuo Shiraga
Like Yves Klein with his "human paintbrushes", and Jackson Pollock with his "drip paintings", Kazuo Shiraga demonstrated a breathtakingly creative genius in his Uchoten (meaning 'ecstasy') of 1994 (estimate: €1,500,000-2,500,000).