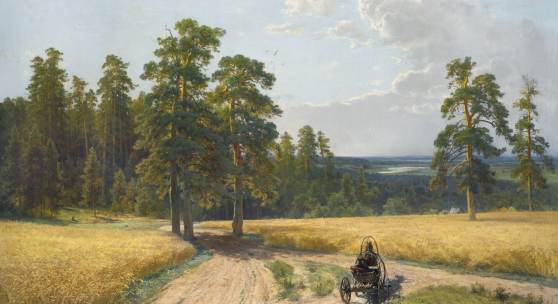 Sotheby’s Russian sales in London on 7th June will be led by one of Ivan Shishkin’s final masterpieces, At the Edge of the Pine Forest, painted a year before the artist’s death in 1898. Depicting the fields outside his native Elabuga, the canvas was painted following what would be Shishkin’s last trip to the region. A summation of his career, the painting is thought to include a self-portrait of the artist as the lone elderly cart driver, travelling away into the landscape of his youth, the same landscape depicted in Rye Fields (1878) in the collection of the State Tretyakov Gallery.

Exhibited at the 25th Itinerant Exhibition in St Petersburg and Moscow in 1897, the painting was immediately bought by Shishkin’s nephew, Nikolai Dmitrievich Stakheev. From correspondence between uncle and nephew it appears that Nicholas II had originally wanted the painting for his own collection and it was only after the Tsar had had first refusal that Stakheev was able to buy it - a result which delighted Shishkin.

Stakheev had inherited a fortune from his family business and built a formidable art collection, despite losing millions at the tables in Monte Carlo. When the family emigrated to Paris after the Revolution, their residence in Moscow was nationalised along with its contents, however this painting was once of the few possessions they took with them - attesting to its personal as well as artistic importance. The painting later passed into the hands of the Belgian artist Charles Defreyn, and will now be offered for sale by his descendants with an estimate of £500,000-700,000.

At the Edge of the Pine Forest will be sold alongside close to 300 Russian paintings and works of art spanning three centuries at Sotheby’s London on 7th June. Please see below for information on more of the highlights. This year’s sale calendar also includes “Contemporary East”, a sale of works by post-war artists from across Central and Eastern Europe and the CIS, rarely seen on the international market. Click here for separate press release.