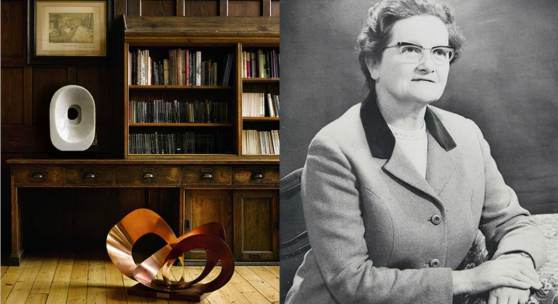 Sotheby’s London, 14 June – Sotheby’s Modern & Post-War British Art Evening and Day Sales on 13 – 14 June brought a combined total of £10,659,875 (est. £7,268,500-10,885,500), with a sell-through rate of 75.9% and half of the lots selling for above their high estimates. Showcasing a host of fresh-to-market and exciting works by some of Britain’s most sought-after artists, the auction achieved Sotheby’s highest total for an equivalent sale since 2007. Records were achieved for CRW Nevinson, Michael Andrews, Richard Smith and Joe Tilson.

Highlighting the sale were two sculptures by Dame Barbara Hepworth, which were consigned for sale by the school that helped launch her on the path to success and realised a combined total of £2,230,000. Proceeds from the sale will be used to help provide new bursaries and enhanced opportunities for students at Wakefield Girls High School, which Hepworth herself attended thanks to a bursary. Forms in Movement (Galliard) of 1956 - a fluid and adventurous sculpture made of bent copper - realised £365,000. A second piece, Quiet Form, carved in marble in 1973, brought £1,865,000 – the highest price for a unique piece by Hepworth sold in London. Further sculptures in the sale also performed strongly, including works by Dame Elizabeth Frink, William Turnbull, Kenneth Armitage and Antony Gormley.

Three works by L.S. Lowry, one of Britain’s best-loved artists, from the collection of another national treasure, the late Cilla Black, sold for a combined total of £698,000. Introduced to buying art by her manager Brian Epstein, from the start Cilla bought what she loved and could relate to - drawn to Lowry in particular as he was the painter of the very world she grew up in. The works were led by Family Group, an example of Lowry’s ability to encapsulate elements of working-class life in the North that also evokes a theatrical quality, which made £353,000.

One of the most significant works of art from WWI to ever come to auction, CRW Nevinson’s Troops Resting sold for a record £473,000 (est. £150,000-250,000). An extremely rare and important depiction of the French conscripts, this work was created for an exhibition attended by Sir Winston Churchill in 1916 and bought for a princely sum of 8 guineas by the remarkable female artist Vera Waddington. Offered at the sale after having remained unseen for 100 years, the pastel set a new auction record for the artist.

A further highlight was Near Malu Kata Evening, Katatjuta (The Olgas) - an extremely rare and monumental painting of Australia by Michael Andrews, one of the most influential British painters of the post-war period, which sold for a record £1,265,000 (est. £500,000-700,000). The appearance of any major painting by Andrews is a significant event, as he created a closely-edited and thus relatively small body of work.