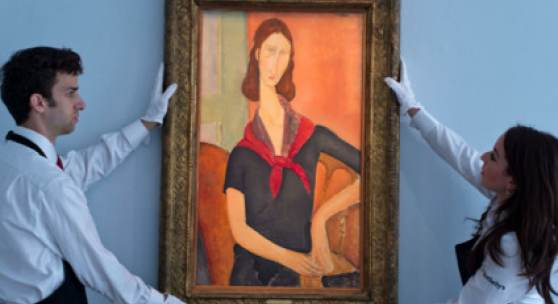 Helena Newman, Global Co-Head of Sotheby’s Impressionist & Modern Art Department, said: “The three stars of the sale are these outstanding works by Picasso, Rodin and Modigliani that brought the art of portraiture into the modern era. Among the greatest works by these artists, they each explore in their own ground-breaking way the universal theme of the eternal feminine form. The lives and art of these giants of Modern art were inextricably linked with their relationship with women and the female form - as model, as muse, as lover, as inspiration - which runs through every aspect of their work.”

Thomas Bompard, Head of Sotheby’s London Impressionist & Modern Art Evening Sales, said: ‘At the dawn of the 20th century, Rodin, Picasso and Modigliani were all driven by breaking the rules of tradition and shaping the idea of modern beauty. Inspired by such different sources as biblical legend, African masks or the Italian Quattrocento, they have each captured and glorified the feminine face in its eternal splendour. Today, their Eve, Fernande and Jeanne are looking as young, alive and familiar as the most celebrated female icons of our generation.'

Pablo Picasso Inspiration
Cubism is considered to be Pablo Picasso’s most important contribution to Modern art, and Femme assise comes from the series of canvases that revolutionised Picasso’s working methods and established his path to Cubism. One of Picasso’s greatest Cubist portraits, Femme assise (estimated to fetch in excess of £30m) was painted in the summer of 1909 when Picasso travelled to his native Spain where he created a series of canvases based on the features of his lover Fernande Olivier, over a period described as ‘the most crucial and productive’ in the artist’s career.

Amedeo Modigliani Adoration
Painted as a loving tribute to the artist’s eternal muse, Jeanne Hébuterne (au foulard) (estimated to fetch in excess of £28m) reveals a tender moment between a pioneer in the world of modern art and his lover. One of the greatest portraits that Modigliani painted of her and the finest to come to the market in a decade, the painting provides a glimpse into one of the most poignant love stories in 20th-century art history. Jeanne met Modigliani in 1917, when she was a young art student, and for the next three years she was his constant companion and source of inspiration. Shortly after Modigliani died of tubercular meningitis Jeanne Hébuterne, inconsolable and reputedly heavily pregnant with the artist’s child, committed suicide by leaping from a window.

Auguste Rodin Temptation
From a series of sculptures considered to be among Rodin’s greatest achievement, his portrayal of the ultimate female icon, Eve, is strikingly modern in its expressive form, yet also looks back to the antique as well as taking inspiration from Michelangelo. Rodin’s Eve (est. £8-12m) is shown here in life-size glory in the moment of recognising humankind’s fallibility. Renowned as the original temptress, Eve is depicted here at the moment of the awakening of her self-awareness. This work was formerly in the collection of actor Sylvester Stallone, who owned other works by Rodin including the daring sculpture of Iris, messagère des dieux sold for £11.6m in Sotheby’s February 2016 Impressionist & Modern Art Evening Sale, a record price for the artist. The sculpture of Eve is one of the earliest figures modelled for Rodin’s great project for La Porte de l’Enfer which he began work on in 1880, an official commission for a monumental door to grace the entrance to the planned building for the new museum of decorative arts in Paris.