Comprehensive Collection of Prints by the 20th-century Belgian Artist 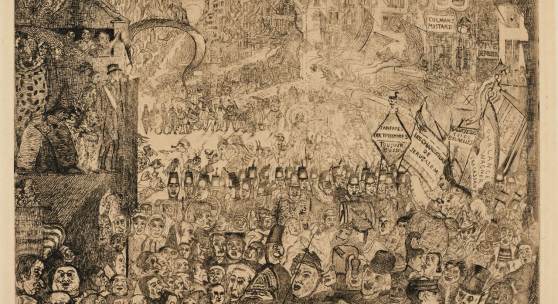 This September, Sotheby’s will offer for sale a private collection of prints by Belgian artist James Ensor, one of the most comprehensive of its kind ever to come to auction. Sotheby’s sale precedes Intrigue: James Ensor by Luc Tuymans, an exhibition this autumn at the Royal Academy of Arts, which will present the first major showing of Ensor’s work to be held in the UK in 20 years.* Ensor’s reputation as a painter of carnivals and crowds – “the painter of masks”2 – has perhaps overshadowed his extraordinary achievements in printmaking. Intrinsically bound to the rest of his work as an accomplished painter and draughtsman, the artist’s prints reveal close connections between the different media. The broad range of subject matter encompasses delicate landscapes, townscapes and seascapes, celebrated self-portraits and sardonic portraits of politicians,religious and fantastical scenes – each suffused with Ensor’s uniquely imaginative vision. Comprising 78 lots and estimated to bring a combined total in excess of £300,000, the collection will be offered in Sotheby’s sale of Prints & Multiples in London on 27 September 2016.

Lucy Rosenburgh, Sotheby’s Prints Specialist, said: “This sophisticated collection of Ensor prints has been assembled with an academic eye and a serious depth of understanding for the artist. Many are very rare and extremely beautiful, where the nuances of the paper used and Ensor’s technique combined to produce prints of startling originality.”

One of the most prominent Belgian artists of early 20th century, James Ensor has long been a fixture in the modernist art canon. He turned to etching in 1886, pinning his hopes on printmaking as the best path to achieve commercial success, something which had eluded him up until this point. It is a measure of the significance of the prints that a representative group of them was the first of his work – in any medium – to enter a museum collection, in 1893. In 1899, the Albertina in Vienna, which housed one of Europe’s great collections of works on paper, bought a complete collection of his etchings to date, a further validation of his reputation as a printmaker.

Ensor rarely numbered his etchings, making it impossible to know how many prints were taken from each plate. He did not own a printing press, preferring to use three different printers in Brussels. With the exception of four later etchings, his graphic work was produced between 1886 and 1904 and features 133 etchings (zinc or copper plate) and dry-points, five lithographs – including two posters – and a further two albums (one containing lithographs, one containing reproductions).

In 1889, Ensor created his most potent and provocative satirical subjects, including two resoundingly political prints which have become particularly rare due to Ensor having withdrawn them from circulation in 1929 shortly after being made a Baron. An example each of these two subjects, produced during this seminal year, feature in the sale.

Alimentation Doctrinaire, première planche is arguably the rarest of Ensor’s prints, with only a handful of known impressions. Estimated at £30,000-50,000 (€35,800-60,000), this etching is a previously unrecorded impression and even more of a rarity in that is a counterproof, which is created by covering a freshly printed impression with a new sheet of paper and then running both sheets through the press again. In this highly satirical scene, the artist depicts the ruling classes of Belgium in the late 19th century perched above the masses and defecating into their open mouths. A grotesque King Leopold II sits in the centre surrounded by bloated clergymen, a general, and a politician, who hold placards representing the reform demands of Belgium’s socialist parties.

Le Belgique au XIXe siècle (illustrated on page 1), estimated at £30,000-50,000 (€35,800-60,000), illustrates the unrest and dissatisfaction of the Belgian people relating to the policies of their King. With a prominent banner referencing the demands of the Socialists for national service, compulsory schooling and universal suffrage, Ensor depicts a fretful crowd of city-dwellers being charged by the gendarmes beneath the all-encompassing gaze of the King.