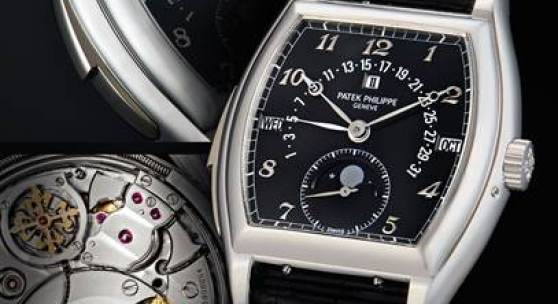 Hong Kong, September 2016 Sotheby’s Hong Kong Important Watches Autumn Sale 2016 will take place on 5 October at the Hong Kong Convention and Exhibition Centre. Leading the sale is A Ref 5013, Exceptional Platinum Tonneau-Shaped Automatic Minute Repeating Perpetual Calendar Wristwatch with Retrograde Date, Moon Phases and Leap Year Indication, by Patek Philippe. Alongside that, the sale will also present series of rare and complicated pieces from celebrated makers, as well as other cutting-edge modern wristwatches by both established and independent brands alike. Of a special note, a collection of sporty watches from a single owner will also be on offer. The current sale showcasing more than 290 lots totals approximately HK$37,100,000 – 53,400,000/ US$ 4,760,000 – 6,850,000*.

Katharine Thomas, Head of Watches Department, New York and Acting Head of Watches, Asia, commented, “This fall, Sotheby’s is pleased to offer a fine selection of watches representing the best of modern Swiss watchmaking for our most discerning connoisseurs. There are rare and sought-after wristwatches, pocket watches and timepieces spanning over a century of the Patek Philippe’s finest creations; as well as modern watches encompassing a range of breath-taking complications. We are particularly excited to offer a single owner group of pieces curated by a collector with a sporty and rugged aesthetic. Embodying a spirit of classic taste imbued with youth and masculinity, this collection is perfect for today’s gentlemen.”

AUCTION HIGHLIGHTS Patek Philippe
Patek Philippe, An Exceptional Platinum Tonneau-Shaped Automatic Minute Repeating Perpetual Calendar Wristwatch with Retrograde Date, Moon Phases and Leap Year Indication, Ref 5013P, circa 2004; lot 2289; Est. HK$2,800,000 – 3,800,000 / US$359,000 – 487,000 Launched in 1992, Reference 5013 is one of the most complex wristwatches ever made by Patek Philippe, with a total of 515 parts. It was also the first minute-repeating wristwatch to feature an automatic movement combined with perpetual calendar with retrograde date indication. The retrograde date hand moves along a 270 degree arc and flies back to the first of the month at midnight of the last day of each month. The tonneau-form shape hearkens back to the most celebrated vintage minute- repeating wristwatches by Patek Philippe, such as the Henry Graves Minute Repeating Wristwatch, sold by Sotheby’s New York in June 2012 for US$3,000,000.

Patek Philippe, A Fine and Rare White Gold Rectangular Tourbillon Wristwatch With 10-Day Power Reserve Indication, Ref 5101G-001, circa 2011; lot 2291; Est. HK$800,000 – 1,200,000 / US$ 103,000 – 154,000 Sporting an impressive triple-stepped case inspired by Patek Philippe’s legendary Art Deco designs, the Ref 5101 carries a combination of two rare complications: a tourbillon and a ten-day power reserve which took the engineers three years to complete. When launched, it was the first of its kind. The tourbillon is showcased on the bridge side as the dominant element of the movement, beautifully revealed through the sapphire crystal display back. The rotating cage alone is composed of 72 miniscule individual parts, yet weighing merely 0.3 grams. It takes a Patek Philippe watchmaker up to three months to produce a Ref. 5101 from beginning to end, and the present lot is precious in that it is one of the only two examples of Ref. 5101 in white gold to be offered at auction.

Modern Wristwatches
Richard Mille, A Rare And Innovative Carbon Composite And Titanium Skeletonized Tourbillon Chronograph Diver's Wristwatch With Power Reserve And Torque Indication, RM025, circa 2014; lot 2128; Est. HK$1,200,000- 1,600,000 / US$154,000 – 206,000 With distinctive modern and technical designs, RM025, part of the Richard Mille diver’s watch collection, is a testament to Richard Mille’s commitment to innovation in the world of horology. The RM025 is a timepiece that is unlike any other Richard Mille creation, not only in its exterior appearance, but also for its ability to deal with one of the world’s harshest environments with a water resistance of 300 meters, all the while continuing to preserve the values of traditional Swiss watchmaking. The RM caliber RM025 unites the complication of a tourbillon with the prominent    complexities of a chronograph movement – a combination extremely difficult and rarely achieved in watchmaking. Another exotic element is the torque indicator complication that is positioned to the right of the barrel, between 12 and 1 o’clock. This indicator shows the tension of the mainspring, ensuring the chronometer function of the movement.