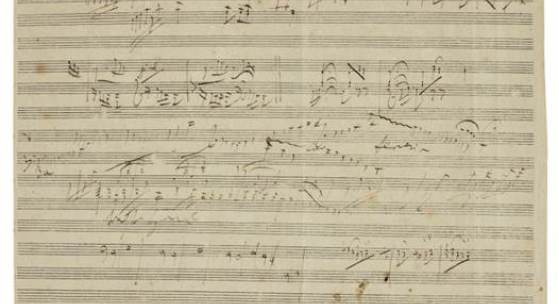 On 20 October 2016 Sotheby’s London will offer a previously undocumented and unpublished sketch-leaf for Ludwig van Beethoven’s most renowned piano concerto, his “Emperor” Concerto, estimated at £150,000-200,000. Simon Maguire, Director and Senior Specialist in Books & Manuscripts said “This is a rare opportunity to acquire an unpublished draft for one of Beethoven’s greatest works”. Offered on the open market for the first time in “The Library of an English Bibliophile, Part VI”, this sketch-leaf is one of the earliest for this great work, possibly containing Beethoven’s first draft of its famous themes.

Beethoven’s Fifth Piano Concerto in E Flat Major, Op. 73 is dedicated to Archduke Rudolf of Austria (1788-1831), the brother of Francis II, Holy Roman Emperor and Beethoven’s great friend, patron and pupil. The Archduke began taking lessons from Beethoven aged 15 or 16 and he was the only pupil that Beethoven taught composition to. The composer dedicated fourteen works to the Archduke in total, more than any of his other patrons.

The Fifth Piano Concerto is now known simply as “Emperor”: legend has it that it was described by one of Napoleon’s officers as “an emperor of a concerto” due to its grandeur and ambition. It is a revolutionary work in which Beethoven boldly reinvents the Piano Concerto, demolishing the older structure of the eighteenth-century form. It is by far the composer’s most forward- looking statement in the genre.

In “Emperor”, Beethoven’s innovation and the radical rethinking of the relationship between solo and accompaniment heralded a new kind of music. The scale of the work was unprecedented for Beethoven; the first movement is longer that any of his previous concertos. The composer used the full scope of the piano and orchestra, with previously scarcely used keys such as C flat and B major, and the highest and lowest ranges of the piano.

In this sketch-leaf, Beethoven’s working process is laid bare. The concerto evolves before our very eyes; fragmentary sketches at the top of the page would later be included in two different movements and by the bottom of the page, the sketch for the first movement has been further developed by the composer. The sketch-leaf gives an insight into his experimental approach, as much of the later passagework was not incorporated by Beethoven in his final version.

Most of the surviving drafts for the Fifth Piano Concerto are in two sketch-books in the Deutsche Staatsbibliothek, Berlin. A few sketches elsewhere are related to these books, notably a leaf in the Pierpont Morgan Library, New York. The watermark evidence of the present manuscript does not allow any firm identification with either sketchbook.