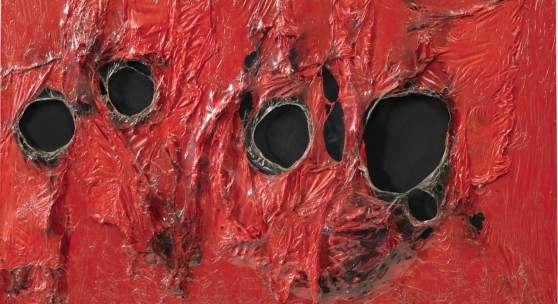 “The Italian Sale” at Sotheby’s London will present outstanding pieces by Modern and Contemporary Italian masters on 7 October 2016. Seminal works by Giorgio Morandi and Marino Marini are joined by an exceptional example from Alberto Burri’s celebrated Plastiche series and Salvatore Scarpitta’s striking 1959 Forager for Plankton. Works by Enrico Castellani include the only surviving panel from his ground-breaking installation Ambiente Bianco, unveiled at Lo spazio dell’immagine, a radical exhibition that heralded a pivotal moment in the development of the post-war avant-garde in 1967.

The sale also features four works from the renowned collection of Paolo and Alida Giuli. Having bridged the gap between gallerist, collector, tastemaker, and curator, Paolo Giuli is considered one of the most important figures in 20th-century Italian art. The four works offered at Sotheby’s are microcosmic of his extraordinary collection and are as aesthetically impactful as they are contextually important.

Highlights
ALBERTO BURRI, Rosso Plastica 5, 1962 £4-6m
Rosso Plastica 5 is a supreme example of one of Alberto Burri’s most celebrated series, the Plastiche. Employing the destructive power of fire as a transformative tool, Burri created some of the most enthralling and ground-breaking works of the post-war period. Both compositionally and chromatically, Rosso Plastica 5 ranks alongside the finest Plastiche, of which many are today housed in esteemed public and private collections. Redolent of an existential but living body, lacerated and tortured in the wake of war’s atrocities, Burri’s gaping apertures of molten red plastic form a cathartic repost to the psycho-social wound of post-war Europe. In the words of legendary curator James Johnson Sweeney: “Burri transforms rags into a metaphor for bleeding human flesh, breathes fresh life into the inanimate materials which he employs, making them live and bleed”.

SALVATORE SCARPITTA, Forager for Plankton, 1959 £1-1.5m
Executed in 1959, the year of the artist’s first solo exhibition at the Leo Castelli Gallery in New York, Forager for Plankton dates from a seminal moment in Scarpitta’s noteworthy career. With its sculptural strands of crimson bandages, weighed down by sand and resin, the present work forms part of the artist’s pioneering series of “torn” paintings, first initiated in Rome in 1957. The monumental scale and dramatic vibrancy make Forager for Plankton a true masterpiece of this revered and ambitious corpus. Born in New York, the American-Italian artist travelled to Italy in 1937 to train as a painter. Two decades later and following his time as a “Monuments Man” during the Second World War, two critically acclaimed solo shows at the Galleria del Naviglio in Milan and at the Galleria La Tartaruga in Rome in Rome in 1957 marked his artistic breakthrough. A year later an introduction to Leo Castelli in Rome proved invaluable for Scarpitta’s career, prompting the artist’s return to New York in 1958. He was quickly welcomed into Castelli’s fold and had his first solo show at the revered New York gallery the following year.

MIMMO ROTELLA, Avventuroso 2, 1962 £400,000-600,000
Avventuroso 2 is a fiercely dynamic blend of text, photography, line and colour that exemplifies Mimmo Rotella’s avant-garde approach. Rotella had begun to make his décollage works as early as 1953. In their production, he raided the advertising posters of Rome armed with a pen knife, before taking them back to his studio and engaging a laborious process of layering up and tearing away, eventually resulting in the diaphanous patchwork effect endemic to the present picture. They are engaging, vibrant, vigorous works that have taken a position of supreme importance within the art-historical discourse of the 20th-century. Avventuroso 2 is further important, even amongst their number: it was exhibited at the 1963 Tokyo Biennale, and has been in the same private collection since 1972.

MARINO MARINI, Grande Teatro, 1958-60 £600,000-800,000
Monumental in scope and scale, Grande Teatro is a magnificent depiction of the themes of paramount importance to Marino Marini’s art: that of the horse and rider. Within Marini’s oeuvre the horse is imbued with an undeniable grandeur, serving as a universal signifier of power and strength. The subject is also rich in classical association, referencing the tradition of equestrian statuary in Italian artistic and political culture from the Renaissance.
The importance of Grande Teatro is further attested to by its extensive and distinguished exhibition history. It was exhibited at the first major show of Marini’s paintings at the Toninelli Arte Moderna Gallery in Milan between 1963 and 1964; it was this show which revealed Marini to the international public as a highly gifted and skilled painter in addition to his already well-known work as a sculptor.

ALIGHIERO BOETTI La primavera dell’anno millenovecentonovanta, 1990 embroidered tapestry, 121.7 by 222.3 by 4.5 cm £1.2-1.8m / €1.4-2.1m / US$1.6-2.4m
Alighiero Boetti’s iconic series of Mappe attest to the world’s ever changing political landscape. Produced in transcontinental collaboration with female Afghan weavers between 1971 and 1994, Boetti’s Mappe delineate an iconoclastic cartography of global relations, stretching from 1971 through to the fall of the Berlin Wall in 1989 and the dissolution of the Soviet Union. Seen as a whole over the course of more than twenty years, the Mappe can be viewed as historical documents highlighting the fluctuations that affected countries and their borders.