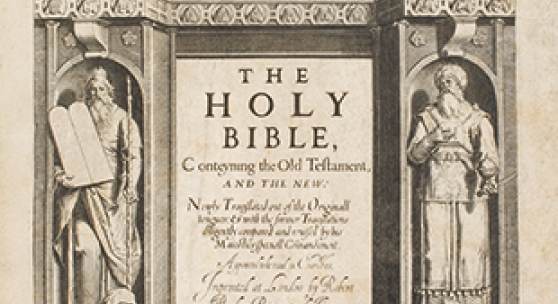 NEW YORK, 6 October 2016 – Sotheby’s is honored to announce the sale of one of the greatest private collections of printed and manuscript Bibles formed since the 19th century, The Bible Collection of Dr. Charles Caldwell Ryrie, which will be held in New York on 5 December 2016. Dr. Ryrie (1925–2016) was best known for his eponymous Study Bible, which contains 10,000 concise and cogent explanatory notes and has sold more than 2,600,000 copies. But while the Study Bible was directed towards the general reader, Dr. Ryrie was a titan among theological and Biblical scholars, and the author of numerous academic books and articles. The leading proponent of dispensationalism of our times, Dr. Ryrie influenced generations of students, teaching at Calvary Bible College, Westmont College, Dallas Theological and Philadelphia College of Bible (now Cairn University).

The New York sale on 5 December will include some 200 lots of manuscript and printed Bibles, ranging from the tenth-century “Benton” Gospels in Greek (estimate $50/$80,000) to a beautifully illuminated thirteenth-century Italian manuscript Bible in Latin (estimate $150/250,000) to two leaves surviving from the Gutenberg Bible, printed in Mainz about 1454 (estimate $50/70,000 each). But the core of the Ryrie Collection is the remarkable run of early English translations of the Bible, including multiple very rare early editions of the versions prepared by Myles Coverdale and William Tyndale, the latter of whom was martyred. Most remarkably, the Ryrie Collection includes a manuscript of John Wycliffe’s New Testament, produced in England about 1430 (estimate $500/800,000). The Authorized, or King James version is also well represented, including the tallest copy known of the first edition, from the celebrated library of Louis Silver (estimate $400/600,000). First and other early editions in many other vernacular languages are represented as well, including German, Spanish, Italian, Irish, Welsh, and the Indian Massachusett language.

Following November exhibitions of selected highlights in London and Chicago, the New York exhibition of the full Ryrie Collection will open on 1 December 2016, alongside the seasonal offerings of Fine Books and Manuscripts.

Selby Kiffer, International Senior Specialist, Books & Manuscripts remarked: “It is a testament to Charles Ryrie’s personal modesty that, despite his myriad accomplishments, he was not widely known as a book collector. The wider world first learned of the remarkable collecting achievement of Dr. Ryrie through the 1998–99 exhibition, Formatting the Word of God, at the Bridwell Library of Southern Methodist University. But that exhibition, remarkable as it was, featured fewer than half of the volumes in Dr. Ryrie’s collection and none of his extraordinary letters and documents signed by theological figures such as Martin Luther, John Calvin, and John and Charles Wesley. When the full extent of his collection—astutely gathered over the course of more than five decades—is revealed, it will surely be acknowledged as a string of bibliographical pearls of great price.”

The family of Charles Ryrie has expressed their hope that his books and manuscripts will go to other collectors who will treasure them as much as he did: “While our father’s collecting was largely a private endeavor, he keenly enjoyed sharing his books and knowledge with a small group of collectors, libraries, and dealers. We are sure that he would be pleased to know that his collection will now go to other collectors just as dedicated and as passionate he was.”

The Bible Collection of Dr. Charles Caldwell Ryrie will offer collectors, both individual and institutional, the opportunity to compete for a great variety of Biblical treasures, many of which have not been available on the market for decades.


The Holy Bible, conteyning the Old Testament, and the New. London: Robert Barker, 1611. The largest known copy of the first edition of the King James Bible, “the only literary masterpiece ever to have been produced by a committee.” Estimate $400/600,000
Sotheby’s Auktionshaus