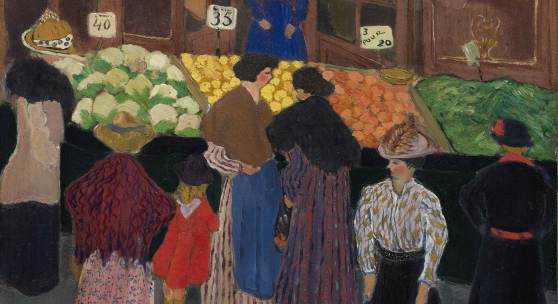 Zurich, 28 October 2016 – Sotheby’s is very pleased to present Au Marché, a stunning work by the celebrated avant-garde painter Félix Vallotton, which will be offered at auction in Zurich on 29 November. Leading Sotheby’s sale of Swiss Art / Swiss Made, this vibrant work from the artist’s highly sought-after Nabi period is a masterpiece of great rarity from one of the most important artists of the early 20th century. The painting comes to auction after more than 60 years in private hands and will be offered with an estimate of CHF 1.5 – 2 million.

A MASTERWORK OF MUSEUM QUALITY

This painting is a fascinating example of Vallotton’s work during his Nabi period, the most sought-after for the artist and one which would prove crucial for the rest of his career. This stunning work depicts a scene at the heart of late 19th-century Paris, in the bustling market of a popular neighbourhood. Félix Vallotton brings the characters to life, using strong outlines and bold unmediated colour alongisde textured surfaces - motifs characteristic of the Nabi movement.

This artists‘ collective found great inspiration in the work of Paul Gauguin and used everyday subjects in order to express personal emotions and the artist’s inner reality. For Vallotton, the visual expression of the Nabi philosophy drew strongly on his fascination with Japanese woodcuts, and this composition is reminiscent of that technique. His choice of subject – a snapshot of real life, expressed through his eyes – brings to mind the bold illustrations for which he had already become very well-known, as a contributor to the literary magazine La Revue blanche.

AN ARTIST AT THE HEART OF THE NABI MOVEMENT

Alongside his friends Paul Sérusier, Edouard Vuillard, Pierre Bonnard and Maurice Denis, in the late 1880s Félix Vallotton was among the founders of the artistic movement known as „Les Nabis“. Reacting against the more academic approaches to painting and taking inspiration from Paul Gauguin, these artists favoured a subjective style with bold planes of muted colour, and a rejection of conventional ideas of perspective. This freed the artists to express their inner selves and to embrace the decorative, symbolic and even spiritual function of painting.

This superb work is an outstanding example of the motifs and philosophy of the Nabi collective. It prefigures the avant-garde movements of the 20th century and is sure to be of great interest to collectors of European Post-Impressionist art.