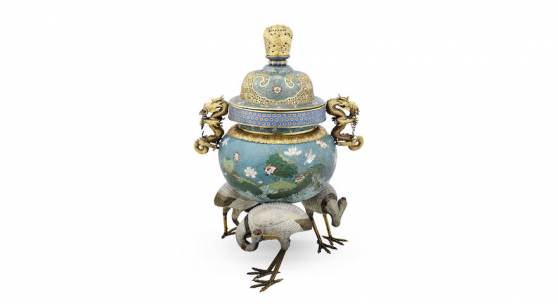 Bonhams is offering an exceptional selection of Chinese ceramics and works of art in its Fine Chinese Art sale to be held on Thursday 10 November at Bonhams New Bond St, during London's Asian Art Week.

Leading the early ceramic section of the sale is an exceptionally rare Ding tripod incense burner, dating to the Northern Song/Jin dynasty, 12th century, estimated at £80,000-120,000. Modelled after a Han dynasty bronze container, lian, and counted amongst 'the five classic wares', the Ding vessel is an elegant embodiment of the values of harmony, regulation and simplicity of the ancient Chinese past, highly regarded by the Emperors of the Northern Song and subsequent dynasties. The remarkable vessel has been preserved in a European private collection for decades.

Fine porcelain Ming and Qing dynasty porcelain from the collection of the late Dr Arthur Spriggs will also be showcased. One of the highlights in the collection is a rare large blue and white incense burner, Chongzhen (1628-1644), estimated at £30,000-50,000. The incense burner is vividly painted in underglaze blue with a continuous scene of Daoist luohan figures, set within a riverscape.

The Imperial opulence at the height of the Qing dynasty, reaching its peak during the Qianlong reign (1736-1795), is represented in the sale by a magnificent imposing cloisonné enamel and gilt-bronze tripod 'cranes' incense burner and cover, estimated at £60,000-80,000. The remarkable incense burner would have once graced one of the Imperial throne halls, possibly in the Forbidden City. The striking vessel ingeniously combines the Emperor's taste for antiquity with the opulent and flamboyant style of the Qing Court.

An exceptionally rare pale green jade farmer and buffalo group, 18th century, estimated at £40,000-60,000, is a superb naturalistic and graceful evocation of the scholarly longing for a recluse life in communion with nature and away from worldly obligations of the official-scholar elite.

Religion played a central role in China and within the Imperial Court. The Seventh Dalai Lama, Kalzang Gyatso, born in 1708, had the patronage of the three most important Emperors of the Qing dynasty, Kangxi (1662-1722), Yongzheng (1723-1735) and Qianlong (1736-1795). An extremely rare cast gilt-bronze figure of the Seventh Dalai Lama, estimated at £40,000-60,000 is arguably one of the finest examples of Buddhist portraiture of the 18th century and is importantly cast on the reverse of the dais with an inscription reading "Veneration to the Ruler Kalzang Gyatso". This figure is among a select group of Buddhist and Daoist bronze figures in the sale.

A pair of rare and large portraits of a Nobleman and a Royal Lady, late Qing dynasty, is estimated at £40,000-60,000. The unique portraits are most probably of a princely couple from the Imperial circle of the Qing dynasty. They were previously in the collection of the late Amedeo Corio, President of the Institute of Fine Arts and the Leone Museum in Vercelli, Piedmont.

Chinese furniture of the late Ming to mid Qing dynasty, made of the most prized woods, zitan and huanghuali, is highly sought after. Its elegant deceptively-simple geometric lines defy age and fashion. A rare huanghuali rectangular table with humpback stretchers, Ming dynasty, 17th century, is one such rare example, offered at £20,000 - 30,000. Harking back to the Imperial Court, is a rare zitan and lacquer cabinet, mid Qing dynasty, estimated at £30,000-40,000.

Complementing the sale is a fine group of yellow glazed and yellow and green enamelled bowls and dishes, dating from the 17th to the 19th century. They were collected by the Palmer family, which took its inspiration for collecting Chinese porcelain from the famous collector R.H.R. Palmer (1898-1970), Chairman of Huntley and Palmer. Another historical collection represented in this sale are works of art in lacquer and ivory collected by Harry Geoffrey Beasley (1881-1939). In addition to collecting Chinese art, H.G. Beasley was a great collector of Pacific anthropological material, and objects from his collections have been acquired by the British Museum, London, Pitt-Rivers Museum, Oxford, the Museum of Archaeology and Anthropology, University of Cambridge, and the National Museums, Edinburgh. Many of the pieces were collected in the first decades of the 20th century and as such represent one of earliest collecting generations.

Asaph Hyman, International Head, Chinese Ceramics & Works of Art commented: "We are delighted to bring to light exceptional and remarkable works of art, collected over decades in many distinguished European collections, and now once more in the public domain to be admired by collectors worldwide."