ALEXANDER HAMILTON – An Important Family Archive of Letters and Manuscripts 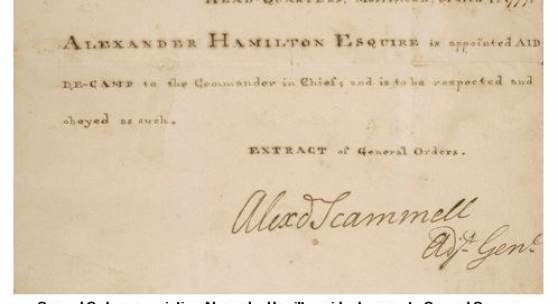 NEW YORK, 1 November 2016 – On 18 January 2017, Sotheby’s New York will offer Alexander Hamilton: An Important Family Archive of Letters and Manuscripts. With a meteoric rise in recognition and popularity over the last fifteen years, Hamilton’s story has captured the popular imagination to an extent almost unprecedented for an historical figure. The sale, the first of its kind, will tell the story of his brief but momentous life through hundreds of documents that have descended in the family for the last two centuries.

Born in Saint Kitts and Nevis and raised in the West Indies, Alexander Hamilton arrived in the Americas as a student at Elizabethtown Academy, located in New Jersey, before enrolling in King’s College (now Columbia University) in 1773. Following the first rumblings of the Revolutionary War, with the Battles of Lexington and Concord, Hamilton joined the New York militia in 1775; just two years later, he entered the public sphere as General George Washington’s Aide-de-Camp. The present archive includes Hamilton’s appointment to this position, the location of which had been unknown to scholars for over a century (estimate $150/250,000). For the next thirty years, until his death at the hand of his archrival, Aaron Burr, Alexander Hamilton served the United States of America as a military officer, Congressional delegate, and finally as the first Secretary of the Treasury.

The material in the auction includes highly personal documents, such as love letters exchanged between Hamilton and his wife Eliza, as well as the condolence letter, sealed with black wax, his father-in-law, Phillip Skyler, sent to his daughter after Hamilton was killed in the duel with Burr (estimate $15/20,000). However, his public career is also well represented with notes he wrote for one of Washington’s annual addresses to congress (estimate $15/25,000) as well as legal papers from his private practice, among many others documents. Perhaps the most poignant relic in the sale is a lock of Hamilton’s hair with a letter of presentation from his wife Eliza (estimate $15/25,000).

While Alexander Hamilton’s background is remarkable in it of itself, his story has experienced a renaissance since 2001, when a selection of his letters, essays and governmental papers was inducted in the Library of America. Three years later, Ron Chernow’s biography, Alexander Hamilton, became a best-seller. But perhaps most significant is Lin-Manuel Miranda’s Hamilton – winner of 11 Tony awards, recipient of the 2016 Grammy Award for Best Musical Theatre Album and winner of the 2016 Pulitzer Prize for Drama. Alexander Hamilton is being further honored this winter with exhibitions at the New York Public Library and the New York Historical Society.