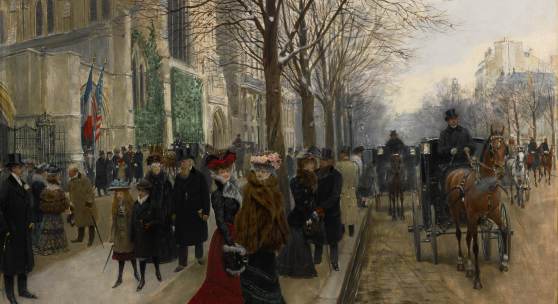 NEW YORK, 16 November 2016 – Sotheby’s annual autumn sale of European Art will be held in New York on 22 November 2016. The sale offers 70 fresh to the market paintings that exemplify the diversity the category, including paintings by Jean Béraud, Sir Alfred Munnings and William Bourguereau. Many of the works on offer are emerging after decades spent in private collections, including two works that have resurfaced for the first time in over a century by Pascal Adolphe Jean Dagnan-Bouveret, Sir Lawrence Alma-Tadema and Franz von Stuck. The pre-sale exhibition will open in our York Avenue galleries on 19 November, alongside our American Art and Latin American Art sales.

STORIED PROVENANCE
The November auction features works commissioned by leading Americans families living both in the United States and abroad. Alfred Stevens’ Ready for the Fancy Dress Ball (estimate $500/700,000) was commissioned by the American industrialist and philanthropist William Henry Vanderbilt, who hung the painting prominently in his home on Fifth Avenue. The work is set in the elaborate ‘Chinese Boudoir’ of the artist’s home on Rue des Martyrs, which served as the setting for several of his most iconic works. The painting comes to the market for the first time in nearly 30 years, from the collection of Philadelphia sports team owner and entrepreneur Edward M. Snider (dedicated release available).

LEARN MORE ABOUT THE HISTORY OF STEVENS ON SOTHEBY’S BLOG
Furthermore, the sale will offer Jean Béraud’s Après L'office À L'église De La Sainte Trinité, Noël 1890 (estimate $600/800,000), on offer by The American Cathedral in Paris. The work was commissioned by James Gordon Bennett, Jr., an American businessman and publisher of the New York Herald, who donated the work to the Cathedral in 1902. Promoting cross-cultural friendship was likely Bennett’s objective for the work, which he subsequently illustrated on the front page of the New York Herald’s Christmas edition in 1901. The painting captures the elegant parishioners leaving the Cathedral on Christmas day. Men sport their finest coats and top hats, children are smartly dressed and women are adorned in furs and elaborate chapeaus, their long dresses in hues of green and red.

SPORTING PICTURES
The November sale is led by a wonderful array of iconic sporting pictures by John Frederick Herring Sr. and Sir Alfred James Munnings. Herring’s large-scale painting The Famous Trotter Confidence Drawing a Gig (estimate $900/1.2 million) from 1842 captures the speed of the carriage and elegance of one of the most celebrated trotters to ever run. Their brisk motion is conveyed by the horse’s mane, with all four legs off the ground and the dust kicked up around them. Additionally the sale will offer no less than 11 works by famed equestrian artist, Sir Alfred James Munnings, which span the breadth of his career. The group is led by an early work, The Plough in Early Spring (estimate $400/600,000) revealing the artist’s appreciation of the era’s realist and naturalist painters and foreshadowing his mature style. Throughout his career, Munnings would alter the number of horses and ponies – change the groupings, viewpoints and locations, which enabled him to explore numerous artistic possibilities including later works like Study for Going to the Start (estimate $200/300,000) and Cherrybounce and a Stable Boy (estimate $250/350,000).

REDISCOVERIES
Sotheby’s is privileged to offer several newly rediscovered works, including an important painting by Marie-François Firmin-Girard. Le Dimanche Au Bas-Meudon (estimate $400/600,000) was exhibited for the first time at the Salon of 1884 and then again at Paris’ Exposition Universelle of 1889. The work provides fresh insight into the work of Firmin-Girard and, as was likely his aim, invites an appreciation of the pleasures of Paris and its surroundings during the artist’s lifetime. The painting delightfully illustrates the artist’s trademark in which he would take enormous pleasure in describing every detail of the scene rewarding those who viewed it carefully.

Moreover, this sale brings to light a work by Pascal Adolphe Jean Dagnan-Bouveret that has been unseen in public for over a century. Long thought to be lost, Madone à la Treille (estimate $60/80,000) is a magnificent example of French Naturalist paintings, a genre that the artist would come to define. The work was exhibited during the Salon of 1889 and gained notoriety when it was reproduced in Century Magazine, and when Louis Comfort Tiffany adapted the composition for stained glass windows. While many details of the painting’s history have yet to be uncovered, it is believed the work could have belonged to Chilean artist and diplomat, Ramón Subercaseaux, who had studied painting with Dagnan-Bouveret. After changing hands several times, the work was sold by Knoedler gallery in 1913 to the American newspaper publisher, William Randolph Hearst. Over a century later, the reemergence of this work reestablishes it as a landmark within the artist’s career.