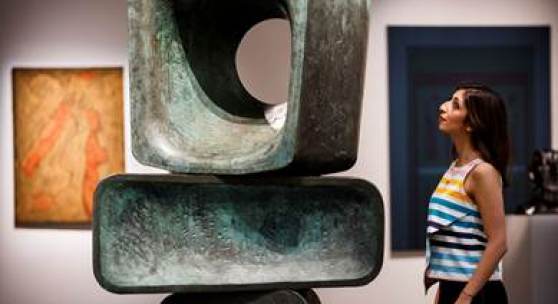 Sotheby’s Modern & Post-War British Art Evening Sale on 22 November will be led by an important and majestic sculpture by Dame Barbara Hepworth from the seminal Family of Man series. One of the most ground-breaking and forward-thinking artists of her generation, Barbara Hepworth carved a path as a world-recognised sculptor – a stature that no female artist had previously achieved. This monumental cast of Parent I will be offered with an estimate of £2 – 3 million.

‘We are thrilled to be offering this monumental standing form – the pinnacle of one of the most iconic series executed by giant of 20th-century British art, Barbara Hepworth. Hepworth is the only British female artist to have two public galleries dedicated to her work, and following a hugely successful retrospective at Tate Britain last year, the appetite for the very best examples of her sculpture has never been stronger.’ Frances Christie, Head of Sotheby’s Modern & Post-War British Art

Sotheby’s London exhibition coincides with the moment in which a complete set of Hepworth's Family of Man sculptures - on view to the public at the Yorkshire Sculpture Park since 1980 - have been restored to their former glory by expert conservators and once again placed on the scenic hillside.