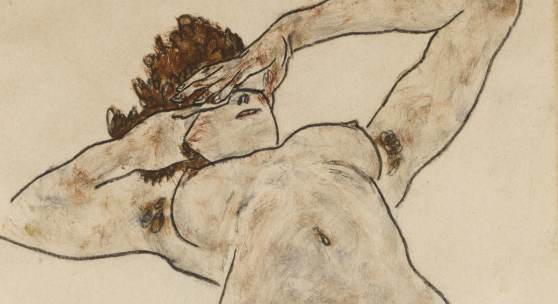 “Art has always existed to tell a human story, and sex has always been a part of that story – whether it is there to compel, to shock or to seduce. Indeed, Eroticism in art has appeared in whatever form art has taken, and our exhibition will take the viewer on a journey through the centuries. This sale creates a stage on which we are able to bring together a fascinating array of artworks and objects across many disciplines – charting a history whilst also presenting stunning works by artists as eclectic as Picasso, Man Ray, Ettore Sottsass and Marc Quinn.”
Constantine Frangos, Head of Sale

Egon Schiele, Akt (Nude), 1917 (est. £180,000-250,000) Egon Schiele was working in the context of the final years of the Austro-Hungarian Empire, where an atmosphere of respect for sex was being furnished by the research of Sigmund Freud and the sensual dream-like paintings of Gustav Klimt. Schiele is noted for his highly original vision and fearless depictions of the naked figure, which along with his technical virtuosity distinguish his nudes as being among his most significant contributions to modern art – never losing their devilish power to provoke, disturb or shock.
Executed in 1917, Akt (Nude) is a prime example of the artist’s late work when he returned to Vienna following his military service during the First World War. In a clear departure from his early nudes, Schiele no longer crops the figure radically nor does the drawing carry any overtly erotic connections. Rather, the body is portrayed intact with greater realism. Most of his effort is now directed towards capturing the plasticity of the human form, the density of the flesh and the solidity of the muscle. The artist sets the figure on the page with unflinching confidence, allowing her to be without support or visible context.

SCULPTURE
 Jacques Loysel, La Grande Névrose, white marble, circa 1896 (est. £120,000-180,000) The work of Loysel won the admiration of contemporaries sublime representation of feminine grace and classical beauty canons. La Grande Névrose – considered until the end of his career as his absolute masterpiece – remained in the sculptor’s atelier until his death in 1925.
The fascinating ambiguity of Loysel’s masterpiece lies in the oscillation between carnal ecstasy and painful exaltation. Loysel was ostensibly depicting the theme of hysteria, as this was an unparalleled opportunity to represent a human body in total tension, yet its manifestation is of an eminently sensual character. In the Second Empire France, neurosis - a multifaceted affection of the nerves - was a widely spread condition. Its clinical manifestations, of which hysteria is the ultimate expression, were fascinating, frightening and obsessive, and were considered as the formidable consequence of the excesses of the decadent society of an excessive period. Throughout his work about the contemporary society’s critical analysis, the most prominent French writer of his day Émile Zola approached the manifestations of neurosis. Loysel acknowledged the influence of the works of Zola on this sculpture, stating that it represented the fatale and sublime outcome of hysteria in the heroine of his novel La Faute de l’Abbe Mouret. La Grande Névrose was also inspired by baroque interpretations of hysteria, stemming from Saint Teresa of Avila’s account of the painful pleasure of her mystical visions.