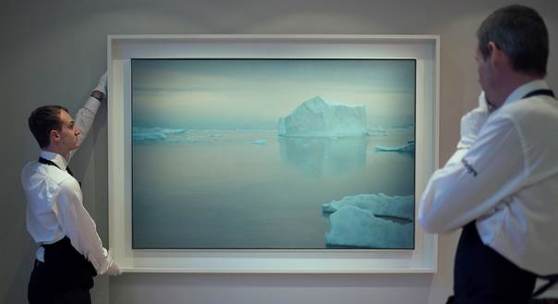 NEW YORK, 2 February 2017 – More than 30 works from Sotheby’s upcoming London auctions of Impressionist & Modern, Surrealist and Contemporary Art are now on public view in our New York galleries, through 6 February. Below is a look at highlights of the works now in view, all of which will be offered this March:

Gerhard Richter’s Eisberg is one of the finest landscape paintings of the artist's career. No other genre has fascinated the artist so extensively nor occupied him over such a long period, yet the total number of major landscape paintings created by Richter is relatively low, marking them as distinctly rare within his oeuvre.

An absolute masterclass in technique, composition and subject matter, Eisberg is the largest of only three paintings Richter made on the same subject, based on photographs taken during a journey through the icy straits of Greenland in 1972. At the time, the Richter's marriage to his first wife Ema was in crisis; his Eisberg series are widely considered to be a metaphor for the artist's self-reflective state of mind at that time. Aside from the present work, the second iteration from the series of three Greenland paintings – Eisberg im Nebel (1982) – is presently housed in the San Francisco Museum of Modern Art.

L’Homme au Papillon is one of the most significant works of Jean Dubuffet’s career. It is rare in content, exceptional in provenance, and sublime in painterly style. Few of his works have the intensity of colour of this painting, which was one of the first four works bought by the artist's biggest patron in the United Kingdom, EJ Power, one of Britain’s leading collectors of the post-war period. He almost single-handedly brought Abstract Expressionism to Britain’s shores, and played a leading role in the instigation and curation of Dubuffet’s landmark retrospective at the Tate in 1966, in which this painting featured.

Falling snow or the snow-covered countryside offered unparalleled opportunities for exploring the effects of light and weather on a landscape, making winter scenes a key motif for the Impressionists. In this rare snow scene by Sisley the bright blue sky alongside the striking interplay between sunlight and shadow on the snow has a spellbinding effect. Indeed, this luminous work was included in the seminal Impressionists in Winter exhibition held at the Phillips Collection, Washington, D.C. and Fine Arts Museums San Francisco in 1998.

The painting dates from a pivotal period in Sisley’s oeuvre when he was working with a group of artists including Monet, Renoir and Degas on the plans for what came to be known as the First Impressionist Exhibition. Dating from the same year as this influential occasion, Effet de neige à Louveciennes epitomises the expressive style pioneered by this group of artists.

Nu couché et tête d’homme is a stunning, brilliantly coloured example of one of Picasso’s favourite themes, that of the artist and model. This series of works proved to be one of his most passionate and energetic projects, inspired by the final love of his life, Jacqueline Roque. In this example, the male figure is depicted as a musketeer – rendered with a wealth of vibrant colours, yet his presence is a mere bust dominated by his nude companion. This vainglorious musketeer is a form of self-portraiture for the artist, and the iconography of this is indicative of Picasso’s self-awareness in the last decade of his life.

Jacqueline was Picasso’s devoted second wife, who remained with him until his death in 1973, and his renderings of the unmistakable raven-haired beauty outnumber those of any other woman in his life. In this work, the female figure possesses Jacqueline’s recognisable strong nose and dark hair and her voluptuous curves and unrestrained pose represent the object of the artist’s desire. Positioned directly in front of the viewer, Jacqueline is identified as the universal and ultimate feminine representation. The love that Picasso felt for his wife is reflected in the passionate vitality of the colours and the excitement radiating from this canvas.