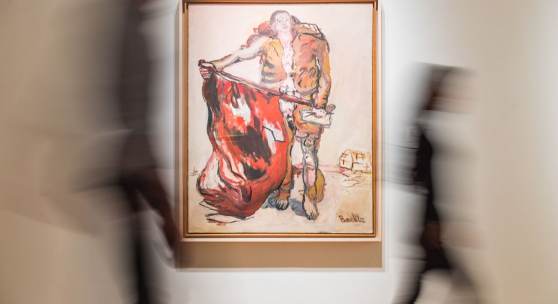 A rare masterpiece by the German painter Georg Baselitz (estimated £6.5m-8.5m) is set to break the record for the artist at auction when offered at Sotheby’s Contemporary Art Evening Auction in London on 8 March 2017. Mit Roter Fahne (With Red Flag), 1965, from the artist’s ground-breaking ‘Heroes’ series, is a painting that cemented the artist’s reputation as one of the most provocative and compelling voices of the post-war era.

Alex Branczik, Sotheby’s Head of Contemporary Art, Europe said “Seismic moments of social and political change in history have always created seismic changes in art, something we undoubtedly see in post-war Germany. Many of these artists tackled challenging; some might say profound, subject matter, while at the same time creating new visual languages which redefined European art history.”

The Growth of German Contemporary

The market for German contemporary art has gone from strength to strength in recent years, led by the £30.4m ($46.3m) achieved for Gerhard Richter’s Abstraktes Bild at Sotheby’s London in 2015, a record for any living European artist. Richter is just one from a wave of German post-war masters defining today’s contemporary art market.