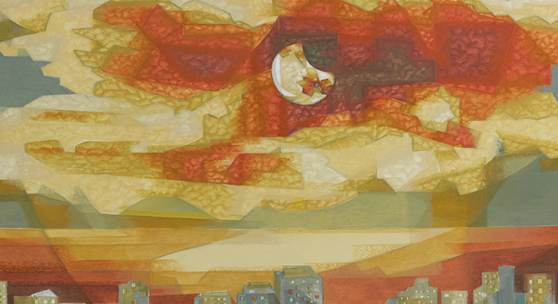 NEW YORK, 2 March 2017 – Sotheby’s New York is delighted to announce the full offerings of Modern & Contemporary South Asian Art. To be auctioned on 14 March, the 58 paintings from the 19th, 20th and 21st centuries, all from private collections, highlight the depth and breadth of this category. From works originating from the Chester and David Herwitz Collection, which established the market for Modern & Contemporary South Asian Art, to masterpieces of modernism, from paintings of abstraction to those of the late 19th century, the sale features artists from many of South Asia’s artistic movements. Following a travelling exhibition of highlights in Delhi, Sotheby’s galleries of Modern & Contemporary South Asian Art will open on 7 March, alongside its online sale of A Lyrical Line: Paintings and Drawings by Francis Newton Souza, which is open for bidding from 3-20 March.

CELEBRATED PROVENANCE
Five paintings from an Important Swiss Collection underline the strength of provenance in this season’s sale. Sayed Haider Raza’s Paysage, Maqbool Fida Husain’s Untitled (Four Women) and Ganesh Pyne’s Untitled (Krishna with Flute) are of particular note, having been off the market since their purchase at Sotheby’s New York on 3 April 1996. Originating from Chester and Davida Herwitz– passionate collectors based in New York who assembled an impressive group of modern and contemporary art of which half was donated to the Peabody Essex Museum in Salem Massachusetts and the other half was sold at Sotheby’s in a dedicated sale – these paintings marked a significant turning point in the Modern & Contemporary South Asian market.

Sayed Haider Raza’s Paysage from 1983 was painted at the apex of the artist’s career (estimate $200/300,000). Marking the artist’s progression towards total abstraction, the work embodies characteristics of Hindu philosophy, specifically its emphasis on geometry. The work’s composition and palette hark back to Indian miniature painting; in fact the colors utilized in this work of art are inspired by the traditional hues of Rajasthan.

Four Women from 1971 is a masterpiece in the oeuvre of Maqbool Fida Husain (estimate $400/600,000). Closely linked in composition to Between the Spider and the Lamp, which drew inspiration from Pablo Picasso’s Cubist masterpiece Les Demoiselles d’Avignon, Four Women flawlessly merges European Modernism and Indian sensibility. In fact, Husain’s addition of silent masks and obliteration of background allows the artist to isolate and alienate the women in this painting – symbolic of his deep awareness of the human condition.

JEWELS OF MODERNISM
For connoisseurs of modern & contemporary South Asian art, Jehangir Sabavala and Francis Newton Souza are considered leaders in the field. The 14 March auction in New York features significant works of art from their artistic output, including a monumental landscape and a characteristic portrait.

Jehangir Sabavala’s City-II is one of his most celebrated works. Concentrated on the sky, one of the artist’s favorite subjects, the oil on canvas is archetypal in its use of parallel layer. With cumulonimbus clouds pluming over the setting sun in downtown Bombay, the heavens dominate the canvas and dwarf the urban setting – a reference to the power of nature over man. This stunning work of art from 1999 carries a pre-sale estimate of $250/300,000.

Francis Newton Souza’s Untitled (Portrait of a Lady) is a beautiful example of the artist’s characteristic monumental two-dimension head and torso compositions (estimate $80/120,000). Set against a thick impasto background devoid of context, the subject becomes the sole focus of the viewer. In addition to its artistic significance, this 1960 portrait is also fascinating in that the sitter has been identified; spotted by Francis Newton Souza at a bar called the North Star in London, the current owner of the painting sat for the artist and was gifted the painting in 1963.

STAR OF THE 21ST CENTURY
Following in the footsteps of Jehangir Sabavala and Francis Newton Souza are a group of strong South Asian artists, who combine their national identities with international perspective. Amongst these rising stars is Bharti Kher, a British-Indian contemporary artist who engages with issues of migration, identity, femininity and sexuality.

Vincent van Gogh’s iconic The Starry Night inspires Bharti Kher’s Starry Night after V.G. (estimate $70/90,000). The Dutch Post-Impressionist’s use of brilliant colors and undulating composition is echoed in the Indian contemporary artist’s medium of reflective mirror surfaces and dynamic movement of the swirls. However, by appropriating the bindi – the mark of pigment applied to the forehead with the Hindu symbol of the third eye – Bharti Kher infuses this work of art with meanings of commercialism, gender roles and popular culture.

DAILY AND THEATRICAL SCENES OF INDIA
At the turn of the 19th century, Horace van Ruith and Raja Ravi Varma were amongst the most well-established artists in India. Working during the British Raj, the rule of the British Crown in India, highlights from this season’s auction fittingly sit at the intersection of East and West.