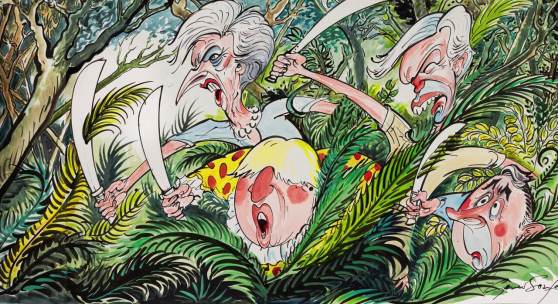 5 MARCH 2017 -- Collectors will have the opportunity to acquire their own piece of political and cultural history in April, when over 130 drawings by the foremost caricaturist and cartoonist of our age, Gerald Scarfe (b. 1936), will be offered for sale at Sotheby’s in London.

Continuing a tradition of uncompromising satire dating back to Hogarth and Gillray, Scarfe has pushed the boundaries of caricature for more than five decades, delivering provocative portraits of the foremost politicians and statesmen of our age, from Winston Churchill to Theresa May. Together, they tell the history of over half a century of political intrigue and seismic change.

Scarfe’s no-holds-barred approach in his contributions for Private Eye and The New Yorker, and as The Sunday Times’ political cartoonist for more than 50 years, has secured him a place on the list of the most 40 important newspaper journalists of the modern era.

Gerald Scarfe said: “I feel it’s the duty of an artist to re-interpret the world and to freshen our stale vision, making us see what we hadn’t realised was there. What I’m trying to do is simply to bring out their essential characteristics. I find a particular delight in taking the caricature as far as I can.

I have always drawn, ever since I could hold a pencil. As a young child I was a chronic asthmatic and spent long periods bedridden either at home or in hospital and I drew. Drawing became my way of communicating. It became my way of exorcising my fears, and that still applies today.

My drawings are of course very personal acts made in the privacy of my own home, but when they leave my hands they escape into hundreds of thousands of copies and may be seen by millions of people. I don’t think about that when I make the drawing – it’s just between my imagination and that piece of paper – but if a drawing is particularly ferocious or overtly sexual and someone looks at it in my presence I have to admit to sometimes feeling shy; I feel so personally about it it’s almost like undressing in public. To me these are not only drawings, they are memories, and mark particular moments in my life.”

The royal family and countless celebrities have not escaped Scarfe’s pen, with portraits of the Queen, the Duke and Duchess of Cambridge, David Beckham and Mick Jagger accompanying over 70 political caricatures in this sale.

The star lot is a historic drawing of Winston Churchill showing the elderly statesman’s final appearance in the House of Commons in 1964. Scarfe had been commissioned by The Times to record the occasion, but his image was deemed too controversial to publish. In the artist’s own words ‘…The Times refused to print my drawing, saying that Churchill’s wife, Clementine, would be upset when the paper dropped through the letter-box in the morning.’ Less than six months later Churchill was dead, and the image appeared on Private Eye’s cover. Until recently, the drawing has been on exhibition at Portcullis House, House of Commons.

There are also examples of Gerald Scarfe’s film work for Disney’s Hercules, for which he was the external design consultant, and for Pink Floyd the Wall - a project that Scarfe happened upon by chance when members of the band saw his work on television and decided “We’ve got to work with this guy, he’s f***ing mad”. Their long-term, highly-acclaimed collaboration on stage shows, album and subsequent film continues to the present day.

Finally, the sale also reveals Scarfe’s theatre work. A serendipitous meeting with director Sir Peter Hall led to an invitation for him to work on a musical, two West End farces and a production of The Magic Flute for Los Angeles opera. Works showing illustrations for The Nutcracker, Fantastic Mr Fox and The Magic Flute are all included in the sale.

Dr Philip W. Errington, Sotheby’s Specialist in Books and Manuscripts said: “Over the past months, spent working alongside Gerald preparing for this sale, I’ve been struck by his consummate skill and artistry. Sometimes he treats his subjects with gentle amusement, at other times he presents a full-blown, biting critique. These drawings pack a significant punch. The works selected range from Disney to Pink Floyd, from Thatcher to May, Reagan to Obama, and Yes Minister to The Magic Flute. There is truly an eclectic mix, spanning his entire half-century career. The sharp, steel-nib of our greatest living caricaturist demonstrates time and time again his pedigree with Hogarth, Cruikshank and Gillray.”

The auction, “Scarfe at Sotheby’s” will take place on 5 April 2017. The sale will be preceded by an exhibition at Sotheby’s, 34-35 New Bond Street, London, from Saturday 1 April – Tuesday 4 April.