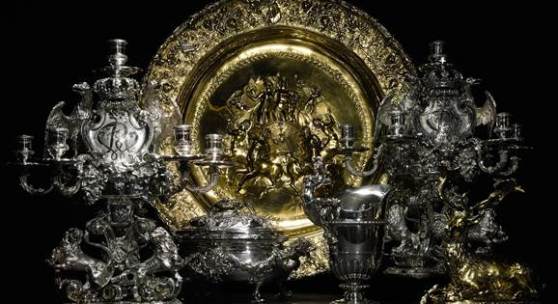 London, 21 June 2017 – On 5 July, Sotheby’s will present an extraordinary selection of the finest and most celebrated works of art as part of the annual Treasures sale. London’s pre-eminent decorative arts auction, the sale brings together the very best furniture, silver, vertu, and sculpture, selected for their outstanding quality, rarity, beauty and Royal and aristocratic provenance. Constituting 44 works all at the pinnacle of their categories, the sale is further distinguished by the inclusion of the property of the Prince of Prussia – a particular highlight among an illustrious list of consignors involved in the sale. Discussing the forthcoming sale, Henry House, Head of Sotheby’s Furniture and Decorative Arts Department, said: “The Treasures sale is undoubtedly one of the true highlights of our auction calendar, allowing us to bring masterpieces of museum-quality which were once the preserve of the royal and noble, to the wider market. We are particularly honoured to be offering a spectacular array of Property of the Prince of Prussia this year and hope that our clients are as excited by this opportunity as we are.”

HIGHLIGHTS FROM THE PROPERTY OF THE PRINCE OF PRUSSIA (LOTS 15-19)
Begun around 1111, the House of Hohenzollern is one of the most glorious European dynasties, whose ascent to power over nine centuries has no parallel in Europe. Intended to be at the forefront of taste, the Hohenzollern palaces were created by the best architects and designers of the day, and decorated with a spectacular array of decorative arts.

These candelabra arrived in Berlin from Augsburg just in time for the wedding of King Friedrich Wilhelm’s daughter, Philippine Charlotte, to Karl I, Duke of Brunswick-Wolfenbüttel. Philippine Charlotte’s wedding occurred on 2 July 1733, while on the 11th of the previous month, her brother Friedrich (Frederick the Great) was married to Karl’s sister Elizabeth Christine, thus establishing a double alliance, between the important Protestant houses of North Germany, Prussia and Brunswick. The Rittersaal Buffet, created at the end of the 17th century in the throne room of the Royal palace in Berlin, was a permanent floor to ceiling display of silver and silver-gilt. It provided a reflection opposite the throne, of the wealth, majesty and confidence of the elector of Brandenburg, Friedrich III and his aspiration, fulfilled in 1701, to become king in Prussia. It is not known where the candelabra were first displayed after arrival at the Schloss in 1733, but around 1763 they had become part of the silver buffet in the throne room (Rittersaal) and remained part of it despite the successive silver melting and wars through the centuries.

Unlike many of the animal drinking cups of the 17th century, this cup is modelled on a real stag that was reportedly shot by Friedrich III, Elector of Brandenburg (1657-1713) near the village of Sauen, in the district of Briesen, in 1696. The shooting of the stag – an extraordinary beast with 66 point antlers, believed by local woodsmen to be supernatural, caught the imagination of contemporaries, so much so, that the event was marked at the time with a stone monument, with the story of the Duke’s momentous kill being recounted in chronicles and illustrated in paintings, prints and works of art of the time. This extraordinary cup is struck with the mark of Daniel Männlich, official goldsmith to the electoral court from around 1676, and is believed to be modelled on a design by the sculptor, architect and master of works to the electoral court, Andreas Schlüter.

The weight, proof marks and form of this armour indicate that this striking suit was designed for mounted combat and not parade or tournament use. Another three-quarter armour with almost identical decoration was formerly in the collections of the Dukes of Este at Konopiště Castle, Benešov, Czech Republic and is now on display in the Schwarzenburg Palace, Prague Castle.

A splendid scent flask in the form of a Peacock – a majestic bird traditionally symbolic of sovereignty and power in Eastern civilizations – this shimmering blue and emerald masterpiece of enamel was created by Eugène Feuillâtre, a celebrated French artist of the Art Nouveau. By the time of its inception and its inaugural display at Paris Universal exhibition in 1900, the peacock had become a symbol of fashionable exoticism and conspicuous opulence and a popular motif of the Art Nouveau movement. Feuillâtre was already a well- established artist when he created this Peacock Flacon, venerated among the eminent artists of the age, with many pieces already in museums across the globe.