CENTURY OF CERAMICS Made in Britain, Sotheby’s London, 13 September 2017 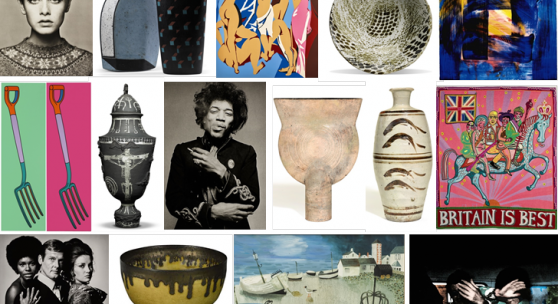 London, August 2017: The father of British studio ceramics, Bernard Leach, identified pottery as having “its own language and inherent laws”. September’s edition of the bi-annual ‘Made in Britain’ auction explores a century of ceramics, presenting a plethora of delicate treasures that go hand-in-hand with some of the most beloved and venerated names of the British art scene.

The curated selection charts the journey of ceramics in Britain, displaying them within the broader context of the arts of the time. The story begins with characterful early works by the Martin Brothers – whose ‘Wally Birds’ delighted and amused in the 19th century – on to exquisite and unseen works by some of the century’s most important figures including Dame Lucie Rie and Hans Cooper – and culminating in the work of the post-war and contemporary ceramicists who continue to push the boundaries of clay to their very limits. Viewed together, the engaging and poetic pieces illustrate an art form that encompasses sculpture, painting, chemistry and geology.

“A direct and intimate art form, ceramics are made to be handled and engaged with. This sale is the perfect opportunity to encounter exquisite pieces that can be lived with and cherished for generations, whilst exploring the enormously rich history that inspired their creation.”

POETRY IN POETRY
Whilst the Arts & Crafts Movement championed the likes of William Morris and William de Morgan, four brothers founded their own pottery in 1873 – creating a flock of creatures that excited and amazed Victorian society. Pioneering craftsmen, the sculptural ceramics they produced paved the way for the development of studio pottery in Britain, in which the maker was involved in all aspects of production.

Eccentric and idiosyncratic THE MARTIN BROTHERS were famed for their experimentation as part of a revival of the medieval and grotesque. The earliest works in the sale, these anthropomorphic Grotesque Bird Jars and Covers (est. £6,000-8,000 and £12,000-18,000) were the ‘must have’ object of Victorian London Society. Named as such after the eldest brother Robert Wallace Martin, these distinctive pieces were objects of humour, beauty and utility. Glazed in the subdued palette of browns, greens, greys and blues so distinctive of Martinware, they mark the transition between decorative Victorian ceramics and twentieth century studio pottery.

Born and brought up in a wealthy family in the Far East, BERNARD LEACH returned to England in the early twentieth century, where he attended the prestigious Slade School of Art under the tutelage of the formidable Professor Henry Tonks. Throwing himself headlong into the art scene, it was a party he attended with his friend, the potter Tomimoto Kenkichi, that was to alter the course of his life forever. Leach later wrote in awe of the events that unfolded, as he was presented with a vessel to decorate, which was then fired. This first experience ofRakupottery enthralled him, becoming a three- dimensional realisation of everything that he had worked towards in his etchings. His unique style nods to traditional Japanese, Chinese and Korean slipware.

Leach embarked on a ferocious study course of ceramics in the Eastern tradition, which he brought back to England in 1920, building a kiln with the assistance of the Japanese potter Shoji Hamada and establishing a studio in St Ives that was to train the next generation of craftsmen. Mastering both form and decoration, he produced elegant thrown vessels in stoneware and porcelain that were then decorated and fired. The pottery still runs to this day, after undergoing a full restoration in 2008. Vase with ‘Leaping Fish’ Design (est. £3,000-5,000) and Vase with ‘Foxglove’ Motif (est. £800- 1,200) give a taste of the artist’s work in this sale.

MICHAEL CARDEW was the first apprentice to Leach at the St Ives Pottery, before leaving to set up his own pottery at Winchcombe in Gloucestershire in 1926. He was drawn to what he called "warm" pots, and his work has a range of subtle earthy colours – from sooty to soft golden, decorated with slipware trails and very simple stylised ducks, fish and leaves. Cardew continued the English tradition of slip decoration, seen in Large ‘River Pattern’ Charger (est. £1,500-2,500), formerly from the collection of Dartington Hall.

One of Britain’s most eminent potters, DAME LUCIE RIE is credited for having elevated the position of ceramics to that of fine arts. Her lasting legacy is witnessed in a series of magnificent pieces that were founded on function but carried strong sculptural qualities.

Born in Vienna in 1902, Rie’s celebrated career was forged out of a splintered life of displacement – escaping growing Nazi pressures to become part of a small group of European émigré artists that redefined British culture. She arrived in London in October 1938, desperate to continue working, and it was not long before she set up her pottery studio at Albion Mews in North London, which was to remain her home until her death in 1995. Rie brought with her a fresh mid-European modernity – reflecting the notion that ceramics encapsulate a diversity of cultural influences from the East to Europe.

A striking and stylish Yellow Footed Bowl (est. £8,000- 12,000) comes from the collection of the late Emmanuel Cooper. Cooper, himself a talented potter and the editor of Ceramic Review magazine, became Rie’s biographer.