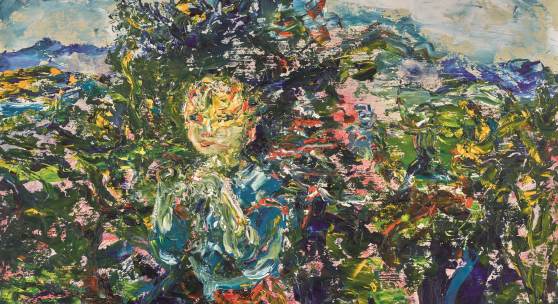 18 August 2017: The collection of one of Ireland’s most important families of the last century will be offered for sale at Sotheby’s in London on 27 September 2017. Illuminating the private world of the Yeats family, the auction will comprise literary material, paintings, drawings and the personal effects of artist John Butler Yeats and his four children: poet W.B, embroidery designer Lily, printing press pioneer Lolly, and artist Jack.

The sale will not only cast new light on the artistic development of these important figures, but also reveal a little of what life was like inside the Yeats family home. Alongside significant paintings, letters and drawings are unseen family sketch books, a family scrapbook, illustrated ‘scribbling’ diaries, photographs, hand-decorated furniture, Jack’s model boats, personalised silver, a top hat, a hand-painted trunk, and the family dining table.

Highlights from the collection will be unveiled for the first time in a public exhibition at the Royal Hibernian Academy in Dublin from 14–16 September, ahead of an exhibition in London from 22–26 September (please see further details in notes to editors). The majority of artworks in the collection have not been seen in public for over 30 years, and the personal effects have never been exhibited before.

The collection has been cared for by the descendants of W.B. Yeats in the family home near Dublin for over 75 years. For three generations, the family has provided a huge wealth of material to the Irish nation, including last year’s donation to the National Library of Ireland of W.B. Yeats’s Nobel Prize medal, valued at €1.5 million.

Ahead of Sotheby’s sale, Ireland’s national institutions were given the opportunity to acquire any of the items in the collection. Consequently, the National Library has made private purchases of a number of items, including correspondence between W.B. Yeats and James Joyce, the ‘Dream Diary’ of W.B. Yeats’s wife George, and the Yeats family library. The Art & Industrial Division of the National Museum of Ireland, following inspections of the Yeats Collection in March and April 2017 also acquired seven works (including a walnut reading/writing table owned and used by WB Yeats, WB Yeats’ home- made series of ‘occult’ artefacts, his series of Japanese Noh theatre masks and a silver box containing 8 coins, inscribed SAORSTÁT ÉIREANN. PRESENTED BY THE MINISTER FOR FINANCE TO W.B. YEATS ESQ. A MEMBER OF THE ADVISORY COMMITTEE ON DESIGNS FOR THE COINAGE, 1928.) for the national collection. The acquisitions by both institutions were made possible by the generous financial support of the Department of Culture, Heritage and the Gaeltacht.

Additional works from the Yeats family collection will be offered in Ireland by Fonsie Mealy Auctioneers, in November and December, at Castlecomer and Dublin.

A spokesman for the family said: “Our family has enjoyed these items for many years. We are delighted that they will now be exhibited and available for everyone to see in Dublin and in London and for collectors to have the opportunity to acquire their own piece of Irish history.”

Charlie Minter, Head of Irish Art at Sotheby’s, said: “This is an intimate, personal collection of many never-before-seen works that shed light on the fabled Yeats family, their influence and personal connections. All the family are represented in this sale. There is a particularly impressive group of works by John, too often the forgotten father of the Yeats family. His work appears rarely at auction; this is our chance to revaluate his pictures and appreciate the great intimacy of his sketches.”

sale highlights
w.b.’s letters to his life-long friend and first lover, olivia shakespear
This collection of over 130 handwritten letters spanning more than 40 years, from 1894 to 1936, is of the highest importance to literary history and of exceptional rarity on the open market (est. £250,000–350,000 / €281,000–394,000).
Olivia Shakespear was Yeats’s first lover and the subject of early love poems, but over the decades their erotic entanglement transformed into one of Yeats’s most important and stable friendships. Following her death Yeats commented that “For more than forty years she has been the centre of my life in London”. She was a significant cultural figure in her own right and shared many of Yeats’s intellectual interests; she also introduced Yeats to Ezra Pound and to George Hyde-Lees, who became Yeats’s wife. In this extraordinary series of letters – totalling some 350 pages – Yeats sends her drafts of poems, gives advice on her novels, writes of his work, life, and reading, and describes the changes in Irish politics and society from before Independence through to the 1930s.