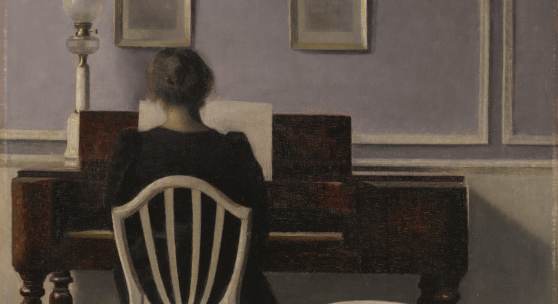 To be Offered in Sotheby’s New York Evening Sale of Impressionist & Modern Art on 14 November 2017
This Autumn, Sotheby’s will offer an elegant and introspective work from Vilhelm Hammershøi’s most accomplished period. Painted in 1901, Interior with Woman at Piano, Strandgade 30 is distinguished by its refined palette of chromatic greys, spare compositional elements, and a mesmeric psychological complexity. Estimated at $2,500,000-3,500,000 (DKK 15.8-22.2 million), the painting will come to auction at Sotheby’s in New York on 14 November 2017 as a highlight of the Evening Sale of Impressionist & Modern Art. In the twenty-five-year period since the work was last offered on the market, Hammershøi has been the subject of numerous retrospective exhibitions in Europe, Asia and America, prompting overdue recognition of one of Denmark’s most innovative and celebrated artists.

Claude Piening, Head of 19th Century European Paintings in London, commented: “Interior with Woman at Piano epitomises Hammershøi’s silent interiors of Strandgade 30. Included in the landmark 2008-9 Hammershøi retrospective at the Royal Academy in London and the Museum of Western Art in Tokyo, this enigmatic painting is heightened by the lone butter dish and plates, constructs which elevate its sense of sparseness and mystery.”

Nina Wedell-Wedellsborg, Head of Sotheby’s Denmark, said: “It is very exciting to be offering a second masterpiece by Hammershøi in the space of a year, hot on the heels of our success in London in June with White Doors, purchased by Copenhagen’s Ordrupgaard Museum. Now is truly the moment for Hammershøi, whose international standing is greater than ever.”

Hammershøi’s almost spiritualist interest in isolation is most powerfully and consistently articulated in his iconic interiors. In 1898 the artist and his wife Ida moved into their apartment at Strandgade 30 in Copenhagen, where they had the walls painted a cool grey, a colour ideally suited to absorb and reflect the distinct Nordic light, and the woodwork a stark white, to provide a brilliant framing device. While Hammershøi’s artistic ancestry is rooted in the formal traditions of the Dutch Golden Age, and Johannes Vermeer in particular, his approach to established genres of painting is wholly original. Adapting the conventions of classical still life painting, he punctuates the stage with pieces from his collection of household objects, where they reappear in countless configurations. An occasional female figure, usually seen from behind, provides the only human presence.

In a rare interview from 1907, Hammershøi explained his preference in developing compositional structure: “What makes me choose a motif are… the lines, what I like to call the architectonic attitude in the picture. And then the light, naturally.” The compositional strength of Interior with Woman at Piano, Strandgade 30 is grounded in its decisive use of horizontal and vertical lines. The top of the piano and wainscoting bisects the work in half; the gradient field of cool tonal greys recede and the warm whites of the linen-covered table top is pushed into the space occupied by the viewer. The right angles of the picture frames on the wall are balanced by the ellipses of the dishes, while the irregular forms of the oil lamp and piano’s legs are squared by the hard lines of woodwork extending out to the edges of the canvas. Even though the work has a graphic flatness, Hammershøi expertly conveys texture with the creased linen tablecloth, the cold and rigid density of the ceramics, and the soft mound of butter. His reduction of the objects to their barest elements anticipates the introspective still lifes of Giorgio Morandi. While Hammershøi has often been viewed as an isolated figure within the field of Danish and European Art, his paintings maintain a clear dialogue with those of James McNeill Whistler, Edvard Munch, and Fernand Khnopff, and a resonance can be felt not only in the works of Morandi, but also Gerhard Richter.