Witness to one of the 19th-century Great Love Stories 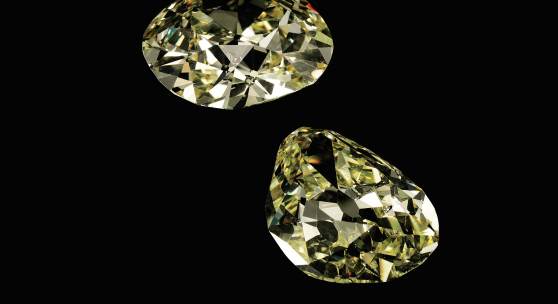 The Donnersmarck Diamonds - Witness to one of the 19th-century Great Love Stories - Sotheby's Geneva - 15 November 2017
To mark ten highly successful years of dedicated Noble Jewels sales in Geneva, Sotheby’s will offer at auction The Donnersmarck Diamonds, a pair of extraordinary Fancy Intense Yellow diamonds with impeccable aristocratic provenance. The superb diamonds, formerly in the Collection of the Princely Family von Donnersmarck, consist of a cushion-shaped diamond weighing 102.54 carats, and a pear-shaped diamond weighing 82.47 carats. The exquisite stones will be offered as a single lot during Sotheby’s auction of Magnificent Jewels and Noble Jewels, to be held on 15 November at Mandarin Oriental, Geneva. The pair is estimated at $9-14 million.

David Bennett, Worldwide Chairman of Sotheby’s International Jewellery Division, said: “These stunning diamonds carry with them a fascinating story, full of romance and determination over adversity, which could have inspired some of the greatest novels and operas, from Manon Lescaut to La Traviata. Ten years ago, they were the star of the show when we launched our very first sale dedicated to Noble Jewels here in Geneva. I am delighted to mark a decade of success by presenting these exceptional diamonds once again. Jewels of royal and aristocratic provenance carry with them a special sense of history and these are no exception: the auction in November will offer the chance for someone to acquire extraordinarily rare jewels imbued with a fascinating history.”

The Donnersmarck Diamonds were part of the collection of La Païva, Countess Henckel von Donnersmarck (1819-1884), arguably the most famous of 19th-century French courtesans, whose vertiginous trajectory from modest circumstances in her native Russia to the highest circles of European aristocracy was sensational.


These historical diamonds were acquired by the Legendary “La Païva”, One of the most famous 19th-century courtesans in Paris and A leading figure of contemporary cultural and artistic society
Sotheby’s Auktionshaus