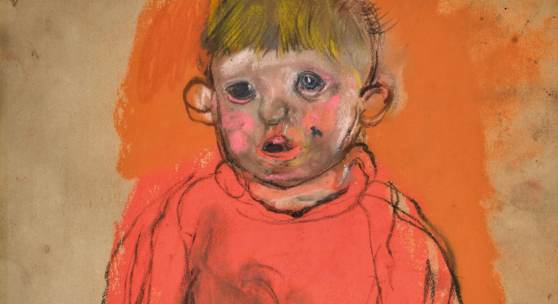 “This is one of our strongest offerings of Scottish art in years. We’re thrilled to be able to present one of the most significant and diverse groups of works available on the market by Joan Eardley, whose recent retrospective at the Scottish National Gallery of Modern Art was a clear indication of how highly revered this visionary artist has become. The Scottish Colourists are headlined by truly great examples by all four proponents, including one of the best still lifes ever painted by George Leslie Hunter. An exciting post-war section includes an absolute masterpiece by Anne Redpath, a top notch example of one of Robin Philipson’s paintings of red poppies, and a fantastic group of works by John Bellany from the 1970s. Last, but not least, one of John Lavery’s coveted golf course scenes make a welcome appearance, following the success of a painting from the same series in our sale last year”. Thomas Podd, Sotheby’s Head of Scottish Art

JOAN EARDLEY
Joan Eardley (1921-1963) was recognised in her lifetime as the leading female, post-war artist in Scotland. Born in Sussex, her family moved to Glasgow in 1940 to flee the bombing raids. She enrolled at the Glasgow School of Art and following her graduation, remained and flourished in Scotland. Her interest in the everyday and the ordinary took her to one of Glasgow’s poorest districts, Townhead where she painted starkly truthful depictions of the local people. Fearlessly honest and unsentimental, she depicted the children in a way that is compelling and distinct from the way children had been painted before. In contrast to contemporary Abstract Expressionism in America, Joan’s work refuted the formalist notion that modern art should move away from realism. Instead her work combined realism and abstraction, creating a highly unique form of painting. By 1952 the remote north-east fishing village of Catterline had become Eardley’s second home. Here she painted windswept coastal landscapes, bolting down her canvas-boards between rocks on the beaches during torrential weather conditions. In 1962 when she was diagnosed with cancer, her determination to continue working led her to refuse medication. The following year she was elected an Academician of the Royal Scottish Academy and was given a solo exhibition in London. The exhibition was critically acclaimed but she was too ill to see the show herself. Sadly, just as her fame was blossoming, she died but with each subsequent exhibition and new publication of her art, her stature has grown, culminating most recently in the 2016-17 retrospective at the Scottish National Gallery of Modern Art in Edinburgh.