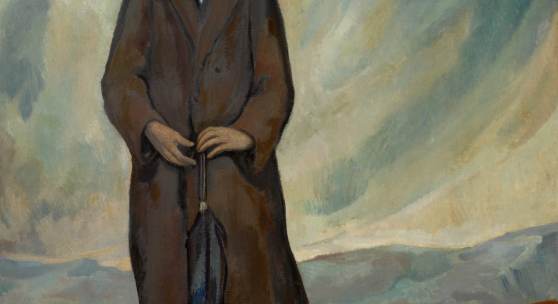 NEW YORK, 15 November 2017 – Sotheby’s is pleased to announce highlights from our Latin America: Modern Art auction in New York. Following the integration of Contemporary Latin American Art into Contemporary Art sales, Modern Art will be presented in a single afternoon session on 21 November. Leading the exemplary works on offer is Diego Rivera’s monumental Retrato de un español (Portrait of a Spaniard) (estimate $3/5 million) – the artist’s most compelling early portrait remaining in private hands. Over six feet in height, the striking masterwork, painted in 1912, pre-dates the artist’s Cubist period and captures him working at the peak of European modernism.

Other highlights this season include: the majestic Reclining nude with fish and fruit by Emiliano Di Cavalcanti – one of the most enchanting representations of Brazilianness painted by the Carioca artist (estimate $1.2/1.6 million); a stunning oil, Personaje en un interior, which affirms Rufino Tamayo’s mastery of color (estimate $1.2/1.6 million); an ornate and recently rediscovered composition by Amelia Peláez, El Jardín (1943) (estimate $400/600,000); and Joaquín Torres-García’s elegant Formas abstractas ensambladas (Assembled Abstract Forms) from 1937, the only work from his landmark 1937 series not painted in black and white (estimate $800,000/1.2 million). Surrealist works, such as Matta’s Let Any Flower Bloom ($800,000/1 million) and Wifredo Lam’s Here on Earth (Ici sur la terre) ($600/800,000) further distinguish the sale.

Works from the Latin America: Modern Art auction will be on view to the public in Sotheby’s York Avenue galleries beginning 18 November.

Painted in 1912, Retrato de un español (Portrait of a Spaniard) by Diego Rivera is one of two works by the artist executed for that year’s Salon d’Automne’s exhibition in Paris (estimate $3/5 million). Depicting Hermenegildo Alsina, a fine books binder and Spanish decorative artist who was a close friend of Rivera, the present work portrays the young man as an elongated figure, settled in a serene pose amid tormented skies. These stylistic traits echo many of the pictorial techniques employed by El Greco in St John the Baptist (ca. 1600) at the Museo de Bellas Artes, Valencia. However, unlike in El Greco’s work, Rivera’s Spaniard is dressed as a man about town, staring confidently at the viewer, and projects an air of sophisticated nonchalance as he retains the viewer’s attention with absolute finesse. Retrato de un español (Portrait of a Spaniard) is among the most historically significant paintings by Rivera to be offered at auction.

Emerging after nearly 20 years in the same family collection, Emiliano Di Cavalcanti’s majestic Reclining nude with fish and fruit epitomizes the association of the female body with classical ideals of beauty, fertility, and abundance, and personifies the bold sensuality and exuberant spirit of the artist’s native Rio de Janeiro (estimate $1.2/1.6 million). Unlike previous renditions from the Renaissance period through the 19th century, Di Cavalcanti situates his subject as an earthly being. Sleeping delicately, she is protected by the schematic figure of a dark horse and a seated character, while resting over a pile of lemons and a plethora of freshly-captured fish spilling over the foreground. Like Fernand Léger, Di Cavalcanti embraced the Cubist notion of fracturing objects into geometric shapes, but retained an interest in depicting the illusion of three-dimensionality.

Exhibiting a luscious palette of opulent Oaxacan colors, Personaje en un interior (estimate $1.2/1.6 million) by Rufino Tamayo is a riveting affirmation of the artist’s mastery of texture. Painted in the late 1980s during a particularly innovative and highly prolific decade, the oil on canvas reveals an extraordinary virtuosity in the treatment of color. Having developed an idiosyncratic painting technique early on in his career, Tamayo’s methodical application of paint remained technical and decidedly personal throughout eight uninterrupted decades of artistic production. As a direct means for expressing universal themes, the medium retained preeminence against his ever-changing narratives and stylistic evolutions.

El Jardín by Amelia Peláez, a recently rediscovered masterpiece of Cuban modernism, presents a uniquely rich mosaic of color and impenetrable vegetation (estimate $400/600,000). Painted in Havana in the early 1940s, the work depicts Peláez’s signature style through a rhythm of curvilinear outlines and pulsating arabesques set against a structured space of impassable patterns. Peláez was a key figure of the Cuban avant-garde movement who constructed her own brand of Cubism, finding inspiration in the intimate realm of her family home which was not only easily accessible but also a suitable environment for the traditional role of women in a predominantly conservative society. Joaquín Torres-García’s Formas Abstractas Ensambladas (Assembled Abstract Forms) is a triumph of 20th-century abstraction and one of the most accomplished works from the 1930s (estimate $800,000/1.2 million). Painted in 1937, the work represents Torres-García’s mission to create a signature American aesthetic that was markedly different from the cultural influences he had recently left in Europe.