250+ Works of Important Judaica and Israeli & International Art at Sotheby's 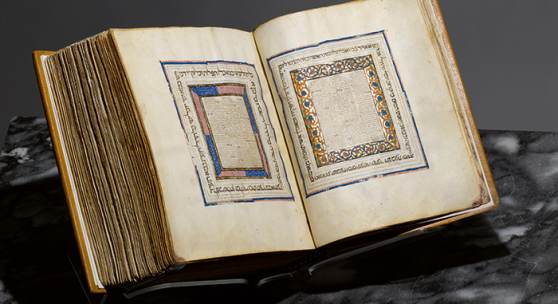 NEW YORK, 12 December 2017 – Sotheby’s annual sales of Important Judaica and Israeli & International Art will take place on 20 December 2017 in New York. The sales will offer a diverse array of Hebrew books and manuscripts, ritual silver and metalwork, ceremonial textiles, and important paintings. The exhibitions will be on public view in our York Avenue galleries beginning 14 December.

IMPORTANT JUDAICA
IMPORTANT BOOKS & MANUSCRIPTS
The Important Judaica sale is anchored by the earliest-known complete illuminated Hebrew Bible from Spain to ever appear at auction (estimate $3.5/5 million). Produced in Castile during the first half of the 14th century, this distinguished illuminated manuscript is a remarkable testament to the cross-cultural influences in the Golden Age of medieval Spain. It is one of only three complete, decorated Hebrew Bibles from Spain to come to auction in the past hundred years and one of only six in private hands. Separate release available.

WATCH & EMBED VIDEO: DISCOVER THE RARE HEBREW BIBLE THAT UNITED THREE CULTURES
The auction also brings to light an exceptionally important Ashkenazic Hebrew Bible (estimate $400/600,000). Unknown to scholars until its recent rediscovery, it is one of only two known Ashkenazic Hebrew Bibles with micrographic ornamentation in private hands. Based on the distinctive script, filigree pen flourishing, and puzzle blue-and-red initial word panels, experts have determined that this manuscript was created in Northern France during the third quarter of the 13th-century. Hebrew Bibles from medieval Ashkenaz seldom come to auction - thus, the rarity of this type of manuscript, coupled with its extraordinary decorative program featuring figurative Masorah, fine filigree pen flourishing, extensive rubrication, and elegant textual layouts, make it a truly significant and highly valuable monument to Ashkenazic civilization in the Middle Ages.

The sale will offer the Earliest Extant Complete Ashkenazic Daily Prayer Book and Haggadah published by Daniel Bomberg in Venice in 1519-1520 (estimate $250/350,000). Extensive research has revealed that this prayer book is the earliest-dated, extant, complete copy of the printed daily, Sabbath, and festival liturgy, according to the Ashkenazic rite. In addition, this volume includes one of the earliest printed Haggadahs. No scholars of the Hebrew book were ever aware of the existence of this prayer book and Haggadah, making them the only known copies to have survived to the present day.

DISTINGUISHED EUROPEAN SILVER
The auction will also feature a fine selection of ritual silver and metalwork, most notably a group of 30 rare 18th and 19th- century silver book bindings, including examples from Rome, Venice, Hamburg and Altona, from the estate of Jack Lunzer, Custodian of the Valmadonna Trust Library. Further highlights of metalwork & silver include a Galician silver and gilt-metal Torah Crown dated 1811 (estimate $20/30,000) and a Dutch silver hanging Sabbath lamp by Hendrik Swierinck, dated to 1756 (estimate $80/120,000).

AN IMPORTANT PAINTING BY JEAN-LÉON GÉRÔME
The selection of paintings on offer is led by a magnificent oil of Moses on Mount Sinai by Jean-Léon Gérôme (estimate $100/150,000). Painted circa 1895-1900, Gérôme’s painting derives from descriptions of the Revelation in the Books of Exodus and Deuteronomy and portrays the very moment when Moses appears with the Tablets, and the massed children of Israel are overcome with awe and wonder.

ISRAELI & INTERNATIONAL ART
SIX MASTERPIECES FROM THE COLLECTION OF THE LATE YEHUDA ASSIA
A successful banker, businessman, and dedicated philanthropist, Yehuda Assia began collecting art with his late wife Jeanette Assia after they were inspired by the private collections of their acquaintances in Geneva. The traditions in which he was raised guided the tone and subject of his collecting. In addition to important works by Reuven Rubin, Avigdor Arikha and Abel Pann, the collection boasts three magnificent paintings by Mordecai Ardon, among them one of the most important paintings by the artist ever to come to auction: Sinai 1967 (estimate $500/700,000). Sinai 1967, like Ardon’s earliest version of this subject, Steppes of the Negev, 1953, in the collection of the Stedelijk Museum, Amsterdam, illustrates themes from the book of Exodus. Here, Ardon juxtaposes symbols of the story of the Israelites departure from Egypt as they wandered the Sinai desert to the Holy Land, as seen with the golden calf – erected by Aaron when Moses was away on Mount Sinai receiving the Ten Commandments – and the bronze serpent, constructed by Moses to protect the people from attack by poisonous snakes.

A REDISCOVERED WORK BY MOSHE MOKADY
Moshe Mokady’s Workers at the Port (estimate $80/120,000) is a recently rediscovered work that epitomizes the bright colors, bold compositions and movement of the artist’s paintings from the early 1920s. Most of Mokady’s early works, pre-1926, were lost or destroyed over the years, and like many artists in Israel at the time, Mokady painted over earlier canvases, making the present painting exceptionally unique. Only when the later layer of paint was removed, did the present work emerge.