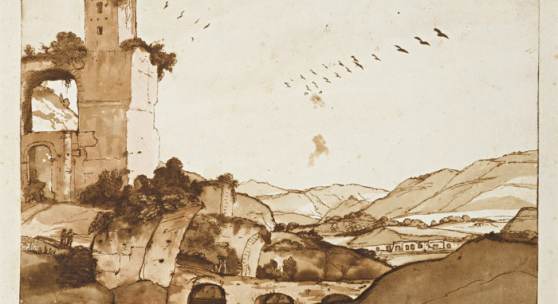 NEW YORK, 23 January 2018 – Sotheby’s annual Masters Week auctions and exhibitions open in New York this Friday, 26 January, showcasing over 900 exceptional European paintings, drawings and sculpture that span the 12th through the 20th centuries. From a 17th-century landscape by Jan Wijnants that was looted by the Nazis during World War II and later recovered by the famed Monuments Men, to the coveted collection of esteemed dealer Otto Naumann, join us this week in New York to view the following:

THE LINE OF BEAUTY: DRAWINGS FROM THE COLLECTION OF HOWARD AND SARETTA BARNET Auction 31 January
Kicking off the sales series is a dedicated auction of drawings from the collection of Howard and Saretta Barnet. Formed over a period of some 40 years by the New York couple, this collection of 28 drawings is unique for its combination of small overall size, great chronological span and exceptionally high quality. Making their selections with razor-sharp aesthetic judgement, the Barnets very carefully assembled a group of drawings that tells the story of five centuries of the art of drawing in Western Europe, spanning from an early Renaissance landscape, drawn around 1500 by Fra Bartolommeo, to the rare and penetrating portrait of fellow-artist Balthus, drawn by Lucian Freud in 1989. Separate release available

OLD MASTER DRAWINGS
INCLUDING THE COLLECTION OF PROFESSOR EGBERT HAVERKAMP-BEGEMANN Auction 31 January
This season’s Old Master Drawings auction is a true celebration of the art of drawing, in all its forms. There are early renaissance figure studies, projects for Baroque compositions, Rococo masterworks such as the exceptional, rare gouache landscape by François Boucher, and a good selection of later works, all the way through to a 1908 self-portrait by the Italian futurist master, Gino Severini. The early Italian drawings in the sale include a fascinating late 15th-century study of the Madonna lactans from the workshop of Bartolommeo Vivarini, a magnificent red chalk female nude by Guercino, and an outstanding, dynamic study of a river god, by Francesco Salviati.

THE OTTO NAUMANN SALE Auction 31 January
Sotheby’s is thrilled to offer property from the gallery and private collection of Otto Naumann, the preeminent dealer of Old Master and 19th century paintings, in a dedicated auction on the evening of 31 January. After almost four decades of collecting and dealing Old Masters, Mr. Naumann is stepping down from his gallery space to allow his son, Ambrose, to establish Ambrose Naumann Fine Arts as a new venture. Mr. Naumann is selling his collection of paintings and sculpture, including Dutch, Italian, and Spanish masterpieces by Giovanni Baglione, Carlo Dolci, Bartholomeus van der Helst, Antonio Mancini and Joaquín Sorolla which have decorated his gallery space and apartment for years. Separate release available

MASTER PAINTINGS EVENING SALE Auction 1 February
The Master Paintings Evening Sale features rare and newly-discovered masterpieces from the 14th to the 19th centuries. A large gold ground by the rare trecento artist Agnolo Gaddi, an early depiction of Lucretia by Lucas Cranach the Elder (estimate $2/3 million), and a pair of exquisite still lifes by the pioneering female artist Fede Galizia are amongst the many notable early works in the sale. Titian’s masterful, large-scale Saint Margaret and the Dragon (estimate $2/3 million) and a captivating portrait by Velazquez in collaboration with Pietro Martire Neri are also major highlights. The 17th-century section of the sale includes a charming royal portrait of Prince Willem II of Orange by Anthony van Dyck, a stunning landscape by Jan Wijnants and Adrian van de Velde, a jovial portrait of a Man with a Beer Keg by Frans Hals and Studio (estimate $300/500,000), a rare work by the important artist Bartolomeo Manfredi and a rediscovered painting of Roman Charity from Willem Drost’s brief Italian period (estimate $200/300,000). A pair of Venetian scenes by Canaletto, an early and important painting of Winter by Nicolas Lancret (estimate $1.5/2 million), a rare painting of Venice by David Roberts and a large-scale composition by Lagrenée lead the 18th century section. Separate release available