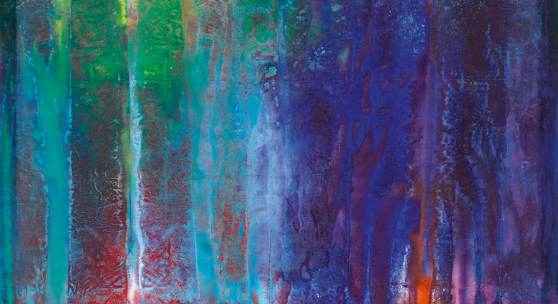 NEW YORK, 20 February 2018 – Kicking-off our 2018 auctions of Contemporary Art, Sotheby’s is pleased to announce the Contemporary Curated sale on 2 March, featuring works from Another Kind of Language: Drawings by Sculptors from the Betsy Witten Collection. This season, co-curators Ellie Goulding and Caspar Jopling have lent their distinct and tasteful eye to selecting 15 of their favorite works from across the sale’s 260+ lots. Among their top picks are works by Charline von Heyl, Ed Ruscha, Richard Serra, George Condo, Sherrie Levine and Andy Warhol. Led by Jasper John’s brilliant Untitled from 1983 and George Condo’s magnetic Rainy Day Butler from 2012, the sale also features exceptional works by Sam Gilliam, Wayne Thiebaud, Julian Schnabel, Isa Genzken, Christopher Wool, Andreas Gursky, and Jonas Wood, among others. Reflecting a diverse ensemble of works hand-chosen by leading figures in the spheres of art, fashion and design, Contemporary Curated is the foremost destination for new and seasoned collectors to Ellie Goulding is a Grammy-nominated singer-songwriter and dedicated activist against climate change and homelessness. She is also an eager-eyed art aficionado and collector. Spending much of her time between recording studios in London and New York or performing concerts on the global stage, Ellie somehow still finds the time to visit museums and gallery shows most weekends. With her growing collection, Ellie continues to fine tune her curatorial eye, focusing primarily but not exclusively on female artists, while expanding her knowledge of the context and meaning of the art that inspires her by meeting with artists, curators and gallerists.

This past October, Ellie was awarded a Global Leadership Award by the United Nations Foundation and has subsequently been honored as a UN Environment Goodwill Ambassador. In the first week of December last year, Ellie traveled between three continents; starting in Kenya on an environmental mission for the UN Foundation, she then flew to Miami for Art Basel where she performed for an intimate party and spent the days walking the fair with Caspar. By the end of the week, the two-time Brit Award recipient was back in London hosting her annual Streets of London charity concert at the Royal Albert Hall, which raises money and awareness for the homeless in the UK’s capital. Ellie is currently finishing her fourth studio album which she plans to release later this year.

With an academic background in History of Art, Caspar spends his time between the Sotheby’s Contemporary Art department and the office of the CEO. Caspar has sold a number of important works of Contemporary and Modern art, both privately and through auction, to his clients spanning Europe and the United States. However, much of Caspar’s time is spent considering and strategizing how business, innovation and technology will have an impact on the art market. He has also been involved with a variety of museums and foundations since he moved to New York, including the Solomon R. Guggenheim Museum, Dia Art Foundation, MoMA and the Metropolitan Museum of Art.

AUCTION HIGHLIGHTS
A radiant example of Jasper Johns’ iconic crosshatching method, Untitled from 1983 (estimate $1.5/2 million) emanates from the artist’s rare series of eighteen unique monotypes created in West Islip, New York. It was not until this particular series that he employed the monotype on a monumental level and exercised an unprecedented sense of technical innovation within his printing technique. In the present work, the contrast between moments of pure and impure pattern evidenced in both the all-over composition and in the individual hatchmarks punctuates Johns’s ongoing negotiation between control and chance. As such, the work highlights his effort to merge the mechanical with the handmade. While the hatches are imperfect and hand drawn, once submitted to the rote printing press, the “human” elements amount to that of the predetermined framework. Together, the hand and the machine demonstrate a brilliantly-textured network of rearranged fragments, pointing to Johns’ preeminent creative genius in his relentless pursuit of the full expressive potential of process and material.

The work is on offer during a particularly popular time for the artist, following the publication of his catalogue raisonné in April 2017 and the comprehensive survey exhibition Jasper Johns: ‘Something Resembling Truth’ which is now on view at The Broad museum in Los Angeles, following the Royal Academy of Arts’ exhibition last Fall.

George Condo’s Rainy Day Butler (estimate $800/1.2 million) from 2012 is a searing expression of frenzied charcoal lines, lusciously textured neons and delicate washes of gray that stream down the surface of the picture plane. Deriving its atmospheric title from the striking pewter overtones that dominate the composition, the work discloses Condo’s ability to effortlessly employ line, form, and color to conjure a climate that is simultaneously turbulent and calm. Within this densely layered compositional web, Condo’s iconic figurative motifs begin to emerge, forming a lyrical narrative starring the fumbling butler, Jean-Louis. Also present is the waiter-valet Roderigo who is identified by his cadmium red jacket sleeve. Signaling an unprecedented creative fervor of frenetically spontaneous mark-making, the present work departs from Condo’s more carefully planned portrait paintings toward a reckless embrace of the sketchy grit inherent in the mediums of charcoal and pastel carved into wet acrylic. Belonging to the artist’s celebrated series of Drawing Paintings, the present work synergizes the traditionally disparate processes of drawing and painting into one fluid gestural expression.