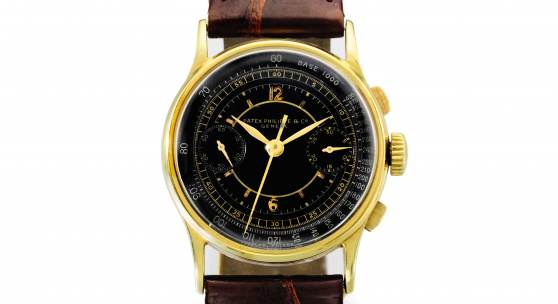 Geneva, 3 May 2018 – Sotheby’s spring sale of Important Watches in Geneva will present a selection of rare and distinguished timepieces, led by an extraordinarily rare Rolex Daytona ‘Paul Newman’ wristwatch, reference 6239, with highly-coveted “tropical” subsidiary dials. Beautifully aged dials such as this one are given the nickname by collectors because their colours fade over time from black to rich brown, and are so rare that the effect now ranks among the most exciting features on today’s market (estimate CHF 200,000 – $ 400,000 /210,000-420,000). Alongside this exceptional piece, the auction on 13 May at Mandarin Oriental, Geneva will also include rare vintage and modern wristwatches by Rolex, Patek Philippe, Audemars Piguet and Richard Mille. Of historical significance and showcasing Swiss crafstmanship, we will also present a museum-quality enameled musical fruit knife probably created by Piguet & Meylan.

Sam Hines, Worldwide Head of Sotheby’s Watch Division, commented, “Following strong results for our spring watch sales in Hong Kong and London, we are delighted to present in Geneva a very fine selection of rare watches and timepieces. The exceptional Rolex Daytona ‘Paul Newman’ - with its stunning toffee brown subsidiary dials - and the superb 1938 Patek Philippe reference 130, with its beautiful black sector dial, each exemplify the untouched original features which are so sought-after on today’s auction market.”

ROLEX DAYTONA ‘PAUL NEWMAN’ WRISTWATCH WITH RARE “TROPICAL” DIAL
The star highlight of the sale, the rare Rolex Daytona ‘Paul Newman’ wristwatch presents a highly unusual effect: the colour of its three subsidiary dials – originally black when the watch was made – has naturally faded to a beautiful rich brown. The piece has been cherished by a single owner who received it as a wedding anniversary present from his beloved wife in 1975. More than 40 years later, a chance meeting on a visit to his local jeweler revealed that this gift held a thrilling secret: not only was it a ‘Paul Newman Daytona’, widely recognized as the most highly coveted vintage Rolex models on the market, but the watch features what are known as a “tropical” subsidiary dials.