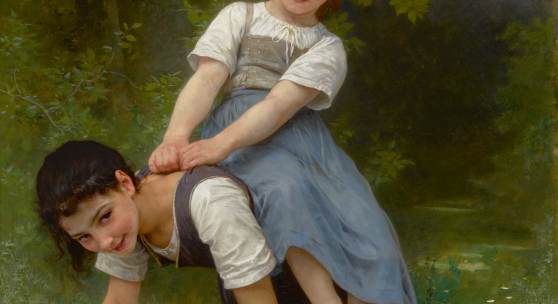 NEW YORK, 8 MAY 2018 – Sotheby’s is delighted to announce our annual spring auction of European Art in New York on 22 May 2018. Led by seven paintings by William Bouguereau, the auction will offer 88 exceptional works that showcase the diversity of the collecting category. The sale also includes exceptional examples by Émile Renouf, Albert Edelfelt and Jean-Baptiste-Camille Corot – many of which are from distinguished private collections and resurfacing at auction for the first time in over a century. Our exhibition opens to the public on 19 May, alongside our exhibitions of American Art, Master Paintings and Important Design.

The May auction will include seven works by William Bouguereau, including La bourrique (The Pony-back ride) from 1884, which is being sold to benefit the Berkshire Museum in Pittsfield, Massachusetts (estimate $2/3 million). Painted during the height of the artist’s commercial success, the work captures two young girls in a moment of play and is a testament to Bouguereau’s emotional and artistic intuition.

Before asserting himself as the most influential champion of French Academic painting, William Bouguereau demonstrated a deep respect for Classicism and the Antique, drawing inspiration from the frescoes of Pompeii and Herculaneum as well as Jacques-Louis David and Jean-Auguste-Dominique Ingres. His monumental suite of four paintings, Les quatre saisons is the artist’s earliest recorded gold-ground decoration, and among the very few early commissions to remain in private hands, having been passed down through generations of the same family for more than 150 years (estimate $600/800,000).

The auction will reunite two masterpieces formerly hung at the Corcoran Gallery in Washington D.C.: Émile Renouf’s The Helping Hand (estimate $300/500,000) and Frederick Arthur Bridgman’s The Procession of the Bull Apis (estimate $500/700,000). From its debut at the Paris Salon of 1881, The Helping Hand was an immediate public success and secured Renouf’s international fame as one of the greatest Realist painters of the 19th century. For over 100 years, it captivated viewers at Washington’s Corcoran Gallery, with its sentimental subject of a weathered fisherman and his fresh-faced companion rowing out to sea and its monumental scale – measuring over 7 feet across.

As the first of Frederick Arthur Bridgman’s paintings to enter a public collection in America, and the last major historical genre painting he would create for nearly a decade, The Procession of the Bull Apis is regarded as one of the artist’s most important early works. Bridgman’s archaeological precision and exotic subject matter, inspired by numerous trips to Egypt and North Africa and a profound devotion to scholarly research, immediately compelled comparisons to the Orientalist paintings of Jean-Léon Gérôme, Bridgman’s teacher and mentor in Paris in the 1860s.

The sale will also unveil, for the first time at auction, Giuseppe de Sanctis’ painting of 6th-century Byzantine Empress Teodora (estimate $100/150,000). De Sanctis’ composition follows late-19th century popular culture’s interests in Byzantine history, exemplified by playwright Victorien Sardou’s 1884 play Théodora, which portrayed the era as one of regal decadence and seductive power. De Sanctis was inspired by the architecture and objects of Byzantium, most prominently displayed in the mosaics on the wall and the tiles of the floors which are reminiscent to those at the Basilica San Vitale in Ravenna, Italy, where two famous mosaics of Justinian and Theodora exist today.  Its exhibition today is its first in over 130 years, marking an important rediscovery for the artist.

Moreover, this auction brings to light an exciting work by Albert Edelfelt that has been unseen in public in over half a century. Painted in 1882, Au Jardin is a magnificent example of plein air naturalism, a genre the artist came to define with friend Jules Bastien-Lepage (estimate $250/350,000). In 1923, the painting was acquired by Edward Franklin Albee II, grandfather of playwright Edward Franklin Albee III, who, together with his partner Benjamin Franklin Keith, built the Keith-Albee theater circuit which dominated the American entertainment industry of the early 20th-century.  The painting’s emergence today adds an important new element to the artist’s oeuvre and is a testament to the long-lasting international appeal of one of Finland’s greatest artists.