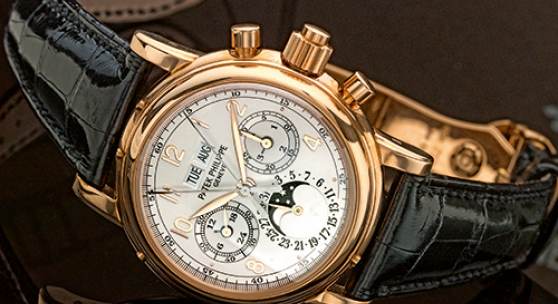 NEW YORK, 15 May 2018 – Sotheby’s is pleased to share the full offerings of our upcoming New York auction of Important Watches, taking place on 24 May 2018. Led by a striking pair of Singing Bird Snuff Boxes from the 19th century, the sale features wonderful vintage and modern offerings for the watch collector at all price points. Following Sunday’s auction of Important Watches in Geneva, the New York exhibition will open to the public on 19 May, alongside 20th Century Design, Master and European Paintings, and American Art.

Fashioned circa 1820 for the Chinese market, where luxurious objects were often gifted in pairs, this Impressive and Rare Consecutively Numbered Pair of Four-Color Gold and Pearl Singing Bird Snuff Boxes by Frères Rochat was separated for decades before being reunited by the present owner (estimate $300/500,000). As such, it appears at our spring auction as the only known reunited pair of consecutively numbered bird boxes created by the horological house. Of the two bird boxes, No. 429 was once held in the collection of Henry Ford II and was offered at Sotheby’s in February 1978.

WATCH AN EXCEPTIONAL PAIR OF SINGING BIRD BOXES
VINTAGE & MODERN PATEK PHILIPPE WRISTWATCHES
Vintage wristwatches by Patek Philippe are led by a Yellow Gold Chronograph Wristwatch with Registers and Tachometer Scale Ref 1463. Made in 1966, Ref 1463 was the first water resistant chronograph wristwatch made by Patek Philippe, and is beloved for its substantial case, screw-down back and round chronograph pushers. Well preserved, the present wristwatch carries a pre-sale estimate of $100/150,000. A Fine Yellow Gold Perpetual Calendar Wristwatch with Moon Phases Ref 1526 from 1950 is another beautiful vintage wristwatch by Patek Philippe (estimate $70/100,000). The first perpetual calendar wristwatch produced in series by the company, the present lot is accompanied with the original Certificate of Origin from its sale in 1961, a wonderful piece of history in and of itself.

The May auction also features a number of eye-catching modern Patek Philippe wristwatches. The top lot of the group is a Fine and Very Rare White Gold Cushion-Form Perpetual Calendar Chronograph Wristwatch with Moon-Phases, Registers and Breguet Numerals Ref 5020G-013. Dated circa 2001, this reference was ahead of its time, only appreciated for its ‘television set’ case and large size after production was halted in 2002. Accompanied by a Patek Philippe Certificate of Origin, 18k white gold interchangeable solid case back and presentation box, this watch carries an estimate of $200/300,000; a second Ref 5020 in pink gold, circa 1997, will also be offered with an estimate of $200/300,000.

Ref 5004, a Fine Pink Gold perpetual Calendar Split Seconds Chronograph Wristwatch with Moon-Phases Leap Year and 24 Hour Indication, is another wonderful example of Patek Philippe’s mastery of watchmaking (estimate $120/180,000). Complicated and complex with over 407 individual parts, this particular model was only made in batches of 12 per year; with movement numbers 879501-879999, the present example belongs to the first series of this model.  Another pink gold wristwatch from Patek Philippe being offered this season is a Perpetual Calendar Chronograph Wristwatch with Registers, Moon Phases and Leap Year Indication Ref 5970R (estimate $90/130,000). Made in 2005, and discontinued in 2011 after seven short years. The wristwatch pays homage to the beloved Ref 1518 and its distinctive rectangular chronograph pushers. This particular model features a Lemania-based movement, which is highly sought after by collectors.

RARE ROLEX SPORT WATCHES
The Important Watches auction will also showcase a number of significant Rolex watches, including 9 Daytonas featuring Oysters, Sea-Dwellers, Submariners and 3 Paul Newmans – specifically Ref 6241 and 6239. The group is led by a Rare Stainless Steel Chronograph Wristwatch with Registers and Bracelet Ref 6241. With its crisp dial and expandable riveted Oyster bracelet, this ‘Paul Newman’ Cosmograph Daytona from circa 1967 is estimated at $100/200,000.

A Rare Yellow Gold Anti Magnetic Chronograph Wristwatch Ref 4500 is another welcome addition to the group (estimate $50/100,000). In fantastic condition, the present lot is distinguished by its pulsations dial – an unusual complication utilized by medical professionals to measure a person’s pulse by indicating the exact heartbeats per minute. Also in exceptional condition is a Virtually Uncirculated ‘Double Red Sea-Dweller’, a Stainless Steel Automatic Wristwatch with Date and Bracelet, featuring its original sticker on the back. Coveted for its wearability and resilience as well as its sharp design and technical achievement – Ref 1665 functions at a depth of up to 2,000 feet – this iconic wristwatch carries a pre-sale estimate of $80/120,000.