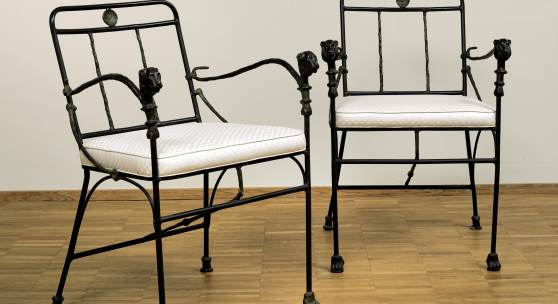 Geneva / Zurich, 18 May 2018 – Sotheby’s upcoming sale, Swiss Art / Swiss Made will be a celebration of Switzerland’s presence on the international art stage, showcasing with rich diversity the work of artists whose pieces are sought-after by Swiss and international collectors alike. Led by a selection of paintings and works on paper by internationally-renowned artist Ferdinand Hodler – as the art world marks 100 years since his death – the auction in Zurich on 5 June will also feature important Swiss painters including Cuno Amiet, Giovanni Giacometti and Félix Vallotton. Bringing together paintings, sculpture, the decorative arts and furniture, the pieces on offer in Zurich have been carefully selected to illustrate the rich diversity and exceptional quality of art that is “Swiss Made”.

Speaking ahead of the auction, Stéphanie Schleining and Urs Lanter, co-heads of Sotheby’s Swiss Art Department, commented, “Following the success of our sale of Swiss Art / Swiss Made in December last year, we are very pleased to present for the spring a wonderful selection of important works, showcasing the diversity of artistic expression in Switzerland. In particular, we will offer a number of rare works with exceptional provenance, hailing from very important Swiss and international collections, testifying to the enduring appeal of Swiss art beyond our country’s borders.”

SALE HIGHLIGHTS :
FERDINAND HODLER
As the art world marks the centenary of the death of Ferdinand Hodler, Sotheby’s June sale in Zurich will be a continuation of our events to celebrate this very important figure’s contribution to Swiss art. The sale will offer several very fine portraits and works on paper by the painter. The portraits include a captivating depiction of Gertrud Müller, an important art collector from Solothurn and long-time friend of the artist, realised in 1916 (lot 33, Bildnis Gertrud Müller im Grünen, 1916, estimate CHF 800,000 – 1,200,000).

Alongside it will be a stunning study of a single figure for the monumental allegorical canvas Blick ins Unendliche, located in the Kunstmuseum Basel. The huge work with five standing female figures is one of five large paintings Hodler produced ; of the other four, two are housed in Zurich’s Kunsthaus (lot 37, Blick ins Unendliche, Einzelfigur, estimate CHF 500,000 – 700,000).

Iconic among the series of portraits which Hodler produced, his depictions of woodcutters are perhaps his best known, having also featured on the country’s 50-franc banknotes introduced in 1911. He went on to produce a number of variations on this theme, and the June sale includes a very fine example (lot 28, Der Holzfäller, estimate CHF 400,000 – 500,000).

WORKS FROM THE “CLASSICAL PERIOD” OF SWISS ART
Perhaps the most well-known era for Switzerland’s most important artists, the turn of the 20th century and the following years was a period of great creativity and artistic exchange. Dating from this time, Cuno Amiet’s impressive painting, Paradies, is permeated by influences including elements of Symbolism and Art Nouveau. Completed in 1903 and featuring the motif of the tree of knowledge flanked by Adam and Eve, the painting set in the artist’s famous garden in Oschwand also shows the influence of Paul Gauguin on the artist’s work, following their time together in Pont-Aven (lot 18, estimate CHF 300,000 – 500,000).

Alongside this very important piece, the sale will also include a major landscape by Félix Vallotton, painted in the same year: Les blés, Arques-la-Bataille, 1903. This very fine work explores the motif of haystacks, which also features prominently in the work of Claude Monet and Vincent Van Gogh (lot 25, estimate CHF 200,000 – 250,000).

An excellent example of Giovanni Giacometti’s post-impressionist style, Winterlandschaft Maloja, 1932 depicts the Alpine village of Maloja with the mountains of Piz Margna and Cima dei Rossi in the background. The proceeds from the sale of this painting will fund the work of the charitable foundation Sozialwerke Pfarrer Sieber (lot 44, estimate CHF 300,000 – 500,000).

“SWISS MADE”
In complement to the more traditional works on offer, Sotheby’s Swiss Art / Swiss Made sales also offer a diverse range of objects created by home-grown artists or international artists with a connection to Switzerland. For our June sale, we have assembled a group of wonderful pieces from the world of decorative arts, by artists including Diego Giacometti, Max Bill, Christo, le Corbusier, Théophile Alexandre Steinlen and Julius Bissier.

From the delightful imagination of Diego Giacometti, we will present a pair of “Fauteuil à têtes de lionnes” armchairs, whose arms are adorned with lionesses’ heads. In the 1950s and 60s, Diego began producing furniture and decorative pieces, using a visual language reminiscent of his brother Alberto’s world-famous sculptures. His work has great international appeal: a world record was recently achieved at Sotheby’s New York for a table he created, and Sotheby’s Paris recently hosted a highly successful exhibition of his work. These bronze armchairs rank among the very finest examples of his art (lot 65, estimate CHF 250,000 – 350,000). Alongside these, we will also offer a beautiful carpet, La promenade des amis (lot 70, estimate CHF 10,000 – 15,000).