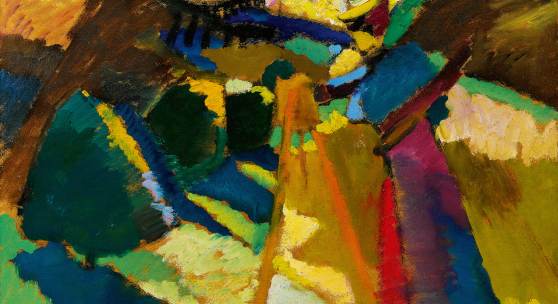 MODERN EXPRESSIONS Exceptional Works by Some of the Most Important, Challenging and Powerful German and Austrian Artists of the 20th Century Led by vibrant Kandinsky painting of Gabriele Münter, his companion, lover and fellow artist To be Offered as Part of Sotheby’s Impressionist & Modern Art Sales In London this June

Helena Newman, Global Co-Head of Sotheby’s Impressionist & Modern Art Department & Chairman of Sotheby’s Europe, said: “Following our sale last summer of two masterpieces by Kandinsky which broke the auction record for the artist twice in one night, we’re thrilled to present another glorious celebration of colour and form from the artist’s career when he was transitioning from figuration to abstraction. Gabriele Münter im Freien vor der Staffelei encapsulates the extraordinary relationship that connected Münter and Kandinsky both in their art and in their lives. Surfacing onto the market from a private collection for the first time in half a century, the painting leads a strong offering of German and Austrian works across our Evening and Day sales.”

Sotheby’s Impressionist & Modern Art Evening and Day sales in London on 19 and 20 June 2018 will include a spectrum of exceptional works by some of the most important, challenging and powerful German and Austrian artists of the 20th century. Featuring paintings and works on paper, many of which are completely fresh to the market, by leading figures such as Wassily Kandinsky, Emil Nolde, Franz Marc, Alexej von Jawkensky, August Macke, Max Liebermann and Egon Schiele, the group of over 65 works to be sold across the Evening and Day sales constitutes one of Sotheby’s largest offerings of German and Austrian art in recent years. Together, they illustrate every aspect of this crucial period in the development of early 20th-century art.

Leading the group is Gabriele Münter im Freien vor der Staffelei (Gabriele Münter Painting Outdoors in front of an Easel) by Wassily Kandinsky, painted in 1910 (est. £3-5 million / €3.4-5.7 million / $4.1-6.8 million). A glorious celebration of colour and form, the work dates from a key period of development for Kandinsky and marks the artist’s definitive transition into abstraction. The artist’s first major breakthrough was his discovery of how colour, when disassociated from representational concerns, could become the principal subject of a painting. In this work, he achieved a delicate balance between the subtle figuration of Gabriele Münter – his companion, lover and fellow artist – and the almost completely abstracted landscape that surrounds her. In 1908 they discovered the small town of Murnau in the foothills of the Alps, and the unique context of the Bavarian countryside was key to Kandinsky’s move towards abstraction.

Münter appears in four paintings from this period, of which this oil is the only one still in private hands. The work originally belonged to Jawlensky, who kept it in his collection until his death in 1941, perhaps as a memento of the happy, productive years he spent in Murnau alongside Kandinsky in a spirit of communal and artistic collaboration.

The revelation of colour was due in part to the journey the artist took to Paris in 1906 and his acquaintance with Fauve paintings by Derain, Delaunay and Vlaminck. Through constant experimentation and extensive preparatory work, Kandinsky’s artistic means developed from an essentially figurative style to pure abstraction. By 1910 he had found the language he sought – sweeping lines, beautiful iridescent patches of colour and kaleidoscopic imagery. Taking his cue from musical composition, he determined that every colour corresponded with a particular emotion or ‘sound’. Appearing on the market for the first time in over fifty years, Gabriele Münter Painting Outdoors in front of an Easel is a powerful illustration of Kandinsky’s important contribution to the history of twentieth-century art.