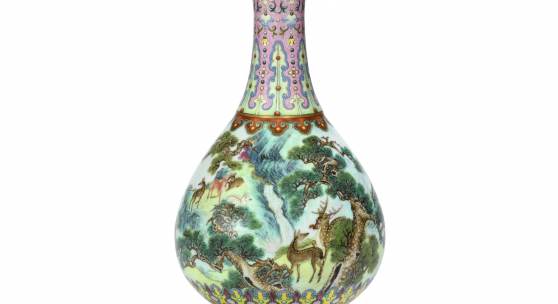 Just to flag, there may well be some excitement in the Paris saleroom tomorrow morning when a rare and unique Chinese imperial vase, discovered by chance in the attic of a family French home, comes to auction. Brought into Sotheby’s in a shoebox by its unsuspecting owners, the 18th century ‘yangcai’ ‘famille-rose’ porcelain vase will be offered with an estimate of €500,000 – 700,000 / €430,000 – 610,000. Its appearance has generated much excitement among collectors, so there may well be fireworks in the room tomorrow!

A little background on the vase for ref:
The only known example of its kind, the vase was produced by the Jingdezhen workshops for the magnificent courts of the Qianlong Emperor (1735-1796). Famille Rose porcelains of the period (or ‘yangcai’ porcelains, as they are known) are extremely rare on the market, with most examples currently housed in the National Palace Museum in Taipei and other museums around the world. On the rare occasions when pieces of this kind do come to auction they are the subject of fierce competition: earlier this year in Hong Kong a famille-rose porcelain bowl sold at Sotheby’s Hong Kong for HK$239 million (£21.7 million / US$30.4 million).

These so-called yangcai porcelain commissions were the very epitome of the ware produced by the Jingdezhen imperial kilns. They were made as one-of-a-kind items, sometimes in pairs, but never in large quantities. This technique combined a new colour palette with Western-style compositions. Beyond their superior quality, yangcai enamels were intended to create the most opulent and luxurious effect possible.