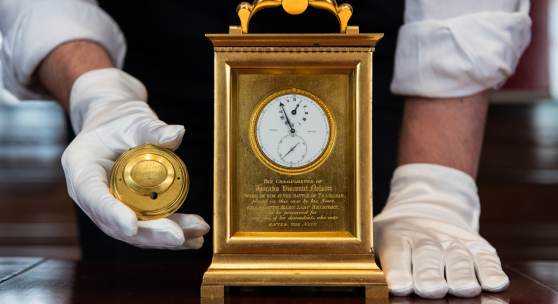 June 2018: Next month, Sotheby’s will offer for sale, a watch that belonged to the great British hero, Lord Admiral Horatio Nelson and set the pace of one of history’s greatest naval battles. Now mounted in a gilt-brass carriage clock case, this pocket watch is thought to be the timepiece carried by the Admiral during the Battle of Trafalgar. Offered with an estimate of £250,000 – 450,000, the watch will be one of the highlights of Sotheby’s Treasures sale on 4 July.

Chairman of Sotheby’s International Watch Division, Daryn Schnipper said: ‘The perfect timing of the British assault at the Battle of Trafalgar was key in the historic victory of the Royal Navy so to be able to offer for sale the watch that Nelson probably used to establish the timing for this decisive battle, is a real privilege.”

Never in a battle had the mastery of time been so critical. The victory at Trafalgar was partly achieved through Nelson’s innovative military tactics in which precise timing played a key part. On the morning of the Battle of Trafalgar, William Beatty - the surgeon aboard Nelson’s flagship HMS Victory, observed how before the battle commenced, the Admiral called upon his lieutenants to synchronise their watches to the time on his own watch. It is therefore quite possible that the tumultuous events of that historic day unfolded to the time kept by this very watch.

Fought on 21 October 1805 off the southern coast of Spain, the Battle of Trafalgar was a decisive moment in the Napoleonic Wars (1796 – 1815). Commanded by Lord Admiral Nelson, the British fleet defeated the combined fleets of the Spanish and French navies, fighting off Napoleon Bonaparte’s advancements to invade Britain.

In the midst of battle, Nelson was shot in the left shoulder, a shot that would prove fatal. Quickly taken below deck, the Admiral’s body was stripped to reduce the risk of infection and his possessions, including his watch, purse, medals and a miniature of Emma Hamilton he was wearing around his neck, removed for safekeeping. Although living long enough to hear the news of the French surrender and of his fleet’s victory, Nelson died on the ship, his body preserved in a cask of brandy and returned to London onboard HMS Victory.

Nelson possibly acquired this Emery pocket watch No. 1104, or was given it by an admirer, following his triumph at the Battle of the Nile in 1798. Given its quality, it is highly unlikely that he would have been able to purchase such a luxurious item by his own means.

One of the nineteen relics returned to Nelson’s mistress, Emma, Lady Hamilton, following his death, the watch was inherited by the Admiral’s brother, Willliam, 1st Earl Nelson and subsequently passed to his sole surviving child, Charlotte. Charlotte arranged for the watch to be mounted in its current form as a carriage clock, presumably so it could be better admired and treasured as her illustrious uncle’s most precious possession.

Excluded from the group of precious relics, including the Admiral’s orders and decorations that were offered for sale in July 1895 and subsequently acquired for the nation by the British government, this watch is one of only a small handful of Nelson’s most prized possessions known to have survived and still in private hands.

Nelson’s watch will be offered in Sotheby’s Treasures sale on 4 July. Bringing to the market exciting masterpieces of museum-quality, superb craftsmanship and distinguished Royal, Noble and Aristocratic provenance, the Treasures sale is the prestigious and much anticipated decorative arts auction of the year.