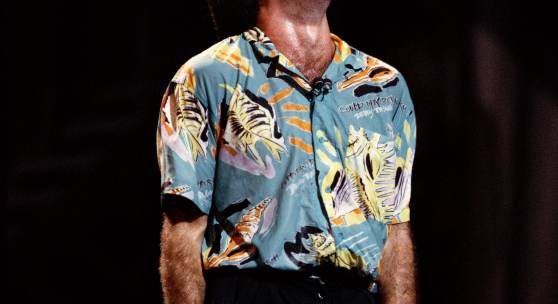 NEW YORK, 5 September 2018 – Sotheby’s is thrilled to unveil the full auction contents of Creating a Stage: The Collection of Marsha and Robin Williams, a dedicated auction to be held on 4 October 2018 in New York.

The 300+ works on offer span the diverse interests and careers of beloved entertainer Robin Williams and his wife of 20 years, film producer and philanthropist Marsha Garces Williams – all reflecting their shared passion for collecting. The auction reflects the character of a much-loved, unfettered talent, and a fun-filled family life.

The generosity of spirit behind these objects extends to Marsha’s decision with the Williams children to donate a portion of the proceeds from the auction to benefit organizations championed by the couple. These include Human Rights Watch, the Christopher and Dana Reeve Foundation, Challenged Athletes Foundation, St. Jude’s Children’s Research Hospital and Wounded Warrior Project. Proceeds from the sale will also help establish a permanent Robin Williams Scholarship Fund at The Juilliard School in New York.

Sotheby’s will hold public previews for Creating a Stage in our Los Angeles galleries from 11 – 14 September, and in our New York galleries prior to the auction from 29 September – 3 October.

FILM & ENTERTAINMENT MEMORABILIA
The significant selection of film & entertainment memorabilia on offer features material associated with projects spanning Marsha’s and Robin’s careers in film and television. Highlights include: more than 40 awards and certificates, including Robin’s Golden Globe Awards for Mork and Mindy, Good Morning Vietnam, The Fisher King and Mrs. Doubtfire; movie props including a prop sword and dagger from the set of Hook; and wardrobe including the battery-powered t-shirt that Robin wore at the 2000 Academy Awards when he performed “Blame Canada” from the movie South Park: Bigger, Longer & Uncut, which was nominated for Best Song.

The collection features a watercolor from the set of Good Will Hunting (estimate $1/1,500), painted by the film’s director, Gus Van Sant and inscribed to Robin. The present watercolor was displayed in the office of Robin’s therapist character Sean Maguire and served as the focal point of Will Hunting’s first therapy session with Sean – arguably one of the most significant scenes in the film.

FINE ART
The Williams’s fine art collection is highlighted by a number of largescale and outdoor sculpture from their home in Napa Valley, which they affectionately referred to as ‘The Ranch’. One of Robin’s favorite works was Niki de Saint-Phalle’s Le poète et sa muse (estimate $350/450,000), which he gifted to Marsha. The artist was staying nearby when she learned that Robin had acquired the work and left a whimsically-decorated letter in the Williams’s mailbox, signed “from a fan” (estimate $3/5,000).

After years of appreciation for Deborah Butterfield’s work, Marsha invited the artist to Napa to discuss a special commission. Shortly after arriving and discussing the project, Deborah began collecting scattered fallen branches from oak, madrone, and manzanita trees around the grounds of the property. From this material, Butterfield assembled three beautiful horses – each made from a specific wood, and each named for one of the Williams’s children: Zak, Zelda and Cody, the latter of which is included in the sale (estimate $220/280,000).

The Williamses had an affinity for Street Art and collected works by Banksy, Shepard Fairey, Invader, Mr. Brainwash and more in depth. The group on offer is led by Banksy’s largescale Happy Choppers from 2006 (estimate $400/600,000), and also features Shepard Fairey’s Arab Woman (estimate $70/90,000). Arab Woman was deeply cherished by Marsha and became an agent for thought-provoking conversations with their children. When she learned the artist was coming in town, she invited Fairey and his wife to dinner at the house – they remain friends to this day.

WATCHES
As an avid watch collector, the sale includes more than 40 wristwatches from Robin’s personal collection, including several gifts from Marsha. The selection features the Gold Plated Rectangular Quartz Wristwatch by Hamilton Watch Co. that Robin Williams wore in the film Dead Poets Society. The watch was engraved on the back Robin Williams Dead Poet Society 1988 and presented to the actor after filming completed.

FURNITURE & DECORATIVE ARTS
The auction includes a selection of furniture and decorative art from the Williams’s residences and other properties. Four illuminated “Ikebana” sculptures by Dale Chihuly were specially commissioned directly from the artist by the couple for their San Francisco restaurant, Rubicon, which they co-owned with Robert DeNiro, Francis Ford Coppola, and Drew Nieporent. A strong group of five whimsical works by designer Judy Kensley McKie introduced a playful element to their home, including a “Monkey” Armchair (estimate $20/30,000).