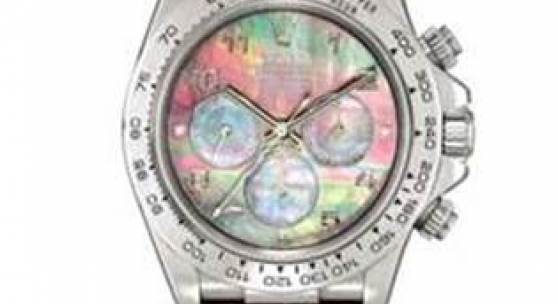 Sam Hines, Worldwide Head of Watches, comments, “We are most privileged to have this opportunity to handle and offer these two amazing timepieces this season. Not only are they rare and important pieces in their own respective rights, they also reflect the rich history of two of the hottest watch companies in today’s market. ”
ROLEX
A VERY FINE AND HIGHLY IMPORTANT PLATINUM CHRONOGRAPH WRISTWATCH WITH MOTHER-OF-PEARL DIAL REF 16516 CASE A712735 COSMOGRAPH DAYTONA CIRCA 1999 ESTIMATE: HK$3,200,000 – 6,000,000 / US$420,000-767,000 COMPLETE WITH ORIGINAL CERTIFICATES AND ACCESSORIES
Manufactured by Rolex in 1999, the present reference 16516 is the only known platinum Cosmograph Daytona powered by Zenith caliber. It was discovered for the first time only recently and is fresh to the market as it was previously unknown. The watch is complete with its certificates and accessories.

There are many other interesting facts about this highly unusual watch. Not only is the unique reference number applied to this watch particularly noteworthy, the dial which is made from black mother of pearl radiates a powerful and dazzling shimmer that adds a sophisticated yet playful charm to this sports chronograph model. Also, while Rolex produced automatic Daytonas only in stainless steel, yellow gold, white gold and steel and gold for many years, it has now been confirmed that one very lucky customer was given a unique master piece in 1999 and it is rumoured that the late Patrick Heiniger, the famous CEO of Rolex, himself wore a platinum automatic Daytona.

The automatic Rolex Daytona was first introduced to the market in 1988 at the Basel Fair, a wristwatch which has since revolutionised the concept of the sports chronograph and captivated the hearts of watch collectors. It features a movement that came from the celebrated Zenith El Primero calibre 400 mechanism, which was first released in 1969, and the first integrated automatic chronograph mechanism to be chosen by Rolex to power the new Daytona model. For the next ten years after the model’s launch, the Daytona was extremely popular and difficult to acquire. It was not until the year 2000 when Rolex manufactured its own in-house automatic caliber that replaced the Zenith caliber, rendering this present lot as a true collector’s item of horological prestige and significance.

This example is considered to be the best. Of original and pristine condition, the watch bears an extraordinarily crisp case which is unpolished and very sharp lugs that are fluted to the highest degree. There is a faint hallmark between the lugs at 6 o’clock but like all other pink third series they are stamped in a very similar way. The dial is in its original state and has seen no cosmetic intervention and bears the Tiffany and Co. signature underneath the moon.

The reference 2499 was first introduced by Patek Philippe in 1950, and then made in five series until 1986, and is one of the most highly sought-after models on the market today.