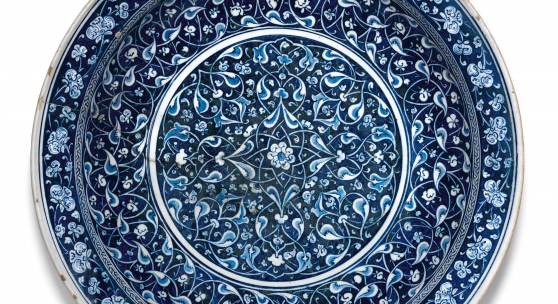 One of the most important pieces of Iznik pottery remaining in private hands, this large and intact dish, or charger, represents a significant discovery in the field of Ottoman art. It belongs to the earliest group of Iznik – produced at the very advent of the art form during the reign of Mehmet II (‘the Conqueror’) – the finest examples of which are almost all held in museum collections across the globe. This small, and exceptionally rare, group of Iznik pottery is characterised by an intense, inky, blue-black colouring, which reflects the embryonic stage of firing control – roughly two decades before a brighter cobalt blue was accomplished. This special piece encapsulates a symbiosis of influences, both local and foreign, as well as a flair for invention.

The ‘Debbane Charger’ is a lost sibling to four other large dishes, all of which are held in museum collections – including Paris’ Musée du Louvre – and are published in Nurhan Atasoy and Julian Raby’s landmark book Iznik: The Pottery of Ottoman Turkey in 1989, where it was suggested that they were used in banquets at the Court for large quantities of food. Though not identical, they display a number of shared elements – the huge scale, central floret, and use of both Rumi and Hatayi motifs, the names given to the rigorously executed arabesque decoration and Chinoiserie floral scrolls respectively. Sotheby’s sale catalogue is the first time that this discovered counterpart has been published.

The charger was formerly in the collection of prolific bibliophile and businessman Max Debbane (1893-1965), who patronised many leading cultural institutions in the town of his birth, Alexandria, as well as serving as President of the Archaeological Society. Opportunities to acquire works of Iznik pottery from this earliest period are indescribably rare, with the most significant examples dating back to Sotheby’s sales in 1993 and 1997.

Further highlights include:
-  Outstanding Persian and Indian paintings from the estate of Joe and Helen Darrion.
-  An exceptional costume album that presents a comprehensive catalogue of the costumes of Ottoman Turkey in the nineteenth century.
-  Two rare ninth century works on astronomy in one volume, collated by a scribe at the end of the thirteenth century in Persia and including annotations in Greek added in the fourteenth century.
-  A powerful Company School portrait of a large, white heron.