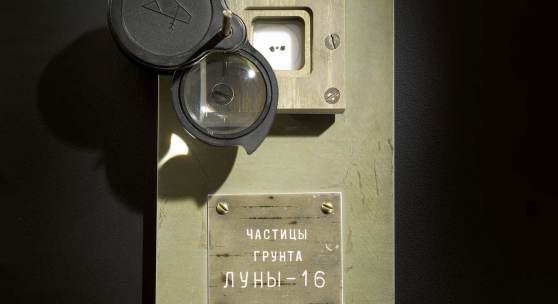 NEW YORK, 30 October 2018 – This November in New York, Sotheby’s will auction the only known lunar samples with clear and documented provenance to be available for private ownership: three moon rocks returned to earth from the unmanned Soviet Luna-16 Mission in 1970, which were ceremonially presented to Mme. Nina Ivanovna Koroleva, widow of Sergei Pavlovich Korolev, the former “Chief Designer” and director of the Soviet space program. The lunar samples will headline our auction dedicated to Space Exploration on 29 November in New York, with a public exhibition opening on 25 November.

The present lunar samples have remained in the same private American collection since Sotheby’s iconic Russian Space History auction in 1993, when they sold for $442,500 – marking the first time that a piece of another world had ever been offered for sale to the public. Estimated to sell at the time for $30/50,000, the samples were consigned by Mme. Nina Ivanovna Koroleva, widow of Sergei Pavlovich Korolev – the former “Chief Designer” and director of the Soviet space program. Next month, the present samples, which are encased under glass below an adjustable lens and labeled “ЧАСТИЦЫ ГРУНТА ЛУНЫ-16” [SOIL PARTICLES FROM LUNA-16], will be offered with an estimate of $700,000/1 million.

Authentic lunar samples available for public acquisition may be qualified as extremely rare, as title to lunar samples remains with the entities that collected them — the United States during the Apollo 11-17 missions, and the USSR (succeeded by the Russian Federation) via the Luna-16, -20, and -24 missions — as well as with the countries gifted the Apollo 11 samples and the Apollo 17 Goodwill moon rocks on behalf of the Nixon Administration. These samples are subject to laws governing public gifts, and in most cases, as in the United States, the law does not currently allow for public gifts to be transferred to an individual. As such, this is the only known, documented lunar sample to have been gifted to a private individual.

Sergei Pavlovich Korolev (1906-1966) was a rocket engineer, aircraft and spacecraft designer, and mastermind of the Soviet space program during the 1950s and 60s. Throughout his tenure as director, he was only known as “Chief Designer” to protect his identity and prevent a possible Cold War assassination attempt by the United States. He was critical to the success of numerous Soviet space programs including: the launch of Sputnik – the world’s first artificial satellite in 1957, the first human earth orbit by Yuri Gagarin, on board Vostok-1 in 1961, the first controlled landing on the moon (Luna-9) and the first craft to orbit the moon (Luna-10) both in 1966.

With his untimely death in 1966, Korolev never lived to see the lunar soil samples returned from the moon. Between 1970 and 1976, the Soviets launched three unmanned sample return missions – Luna-16, Luna-20, and Luna-24 – with all three successfully landing on the eastern limb of the lunar nearside. One of the finest technological achievements of the Soviet space program, the Luna-16 spacecraft consisted of an ascent stage mounted on top of a descent stage, which was outfitted with radiation and temperature monitors, telecommunications equipment, a television monitor, and most importantly, an extendable arm with a drilling rig used for the collection of a lunar soil sample.

In September 1970, Luna-16 landed within the northern Mare Fecunditatis (landing site: 0.7°S, 56.3°E) south of the Crisium basin rim, drilled a hole in the surface to a depth of 35 cm and extracted a core sample before returning the soil safely back to earth. The central fragment is basalt with feldspar crystals visible typical of mare terrain while the adjoining larger fragments are typical surficial debris called regolith: finely structured vesicular agglutinates showing glass coatings caused by an age-old micro-meteorite impact. The grain size and overall characteristics of the Luna-16 sample are very similar to mare soils returned by the Apollo missions, and a variety of analyses have revealed minute traces of more than 70 elements in the totality of the Luna-16 sample. Tests on other basalt fragments from the samples made at the California Institute of Technology using rubidium-stronium isotopes have dated the rock to approximately 3.4 billion years old.