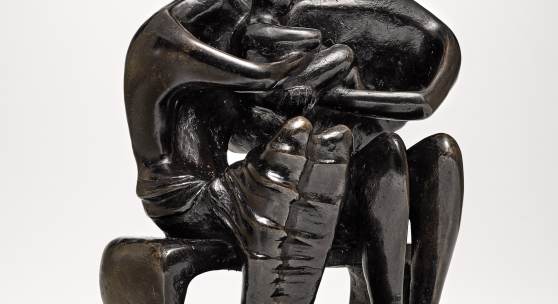 Sotheby’s Autumn sale of Modern & Post-War British Art is led by an exciting array of paintings, works on paper and sculpture by the most celebrated and recognised names in the field, capturing the truly international scope of the British Arts scene over the course of the past century.

EVENING SALE HIGHLIGHTS
Henry Moore, Family Group, bronze, conceived in 1946 and cast by 1947 (est. £1,300,000- 1,800,000)
‘The arms of the mother and the father [intertwine] with the child forming a knot between them, tying the three into a family unit’ A seminal work by the most celebrated British sculptor of the past century, Henry Moore’s Family Group represents the zenith of the sculptor’s lifelong obsession with the universal motif of parenthood. To Moore, the family became a symbol of hope, of the intransience of human bonds of support, compassion and care, and of turning to the domestic life in the face of immense experiences of trauma.

 The large-scale iteration of this piece was a fundamental spring- board to Moore’s post-war career. Immediately after the war, architect Eugene Rosenberg commissioned the artist to create a sculpture for his project, the Barclay School in Stevenage – Moore’s first large-scale commission in bronze. This was the first purpose- built comprehensive secondary school built in Britain after the war and Moore’s monumental version of Family Group was installed in 1950.

International appreciation of Moore’s work was burgeoning immediately after WWII – with his first ever major retrospective taking place at The Museum of Modern Art in New York in 1946. This maquette boasts exceptional provenance, having been acquired by MoMA just two years after its conception.

William Roberts, The Joke, oil on canvas, 1923 (est. £300,000-500,000
)  Few works of the early twentieth century paint as vivid a picture of the heady Bohemian London nightlife as William Roberts’ The Joke, which is appearing at auction for the first time, having been acquired by the grandfather of the present owner from the artist’s very first solo exhibition in 1923.

The evocative painting depicts the artist’s fellow Slade student and brother-in-law Jacob Kramer and the well-known Creole model Hélène Yelin at the Harlequin Tea Rooms. Situated on Beak Street, tucked away behind London’s bustling Regent’s Street, the Harlequin became a hub for artists, models and muses in the 1920s. The atmosphere and subject matter of the Harlequin led Roberts to produce some of the most striking and important paintings of his career. Shaking off the confines of tradition, they capture the growing influence of New York over British culture, and the birth of the Jazz age, with the great sense of excitement that abounded during this post-war period.    

Sir Peter Blake, Strong Man, 1, oil on board with collaged elements, 1957 (est. £150,000- 250,000)
 ‘I paint about the life I knew. It isn’t Victoriana, it’s nostalgia, or rather a sentimentality, for my childhood, but it’s also a feeling for what’s going on now – an emotion’ Unseen in public for well over half a century, Peter Blake’s Strong Man, 1 comes from a small group of proto-Pop works created by the artist whilst still in his early 20s, exploring his fascination with characters that populated the fringes of society, as well as his love of nostalgia. The witty works that Blake produced during this period, executed on found wooden boards, become objects – relic-like –scarred by the hand of the artist and the imagined passing of time. The paint surface is rubbed, taking on an antique appearance and referencing the fading memory of childhood experiences.

The popular English pastime of the circus, in all its faded glory, fascinated the artist. As a student at the Royal College, each Christmas for three years Blake was allowed backstage at Bertram Mill’s circus at London’s Olympia – once finding himself sketching alongside artist Dame Laura Knight. He was to be inspired not only by the performers he observed there, but also the broader visual style of the circus, with bright, bold lettering that was to appear in many of his works. Included in one of the artist’s first public exhibitions at the Institute of Contemporary Arts in 1958, this painting was acquired by a young art student living in London at the time – purchased as the very best of the contemporary British art scene.

Gillian Ayres, Nimbus, oil and Ripolin on canvas, 1961 (est. £40,000-60,000)
 Nimbus is one of the finest examples of Gillian Ayres’ work from the late 1950s and early ‘60s, encapsulating the sheer quality, vitality and expressive power of her canvases. One of Britain’s most significant abstract painters, Ayres, who passed away earlier this year at the age of 88, stands alongside her American contemporaries Joan Mitchell and Helen Frankenthaler. Like Mitchell and Frankenthaler, Ayres has until recently been overlooked in favour of her male counterparts in the narrative of British abstraction – an attitude that is changing as historians, museums and collectors look to redress the gender imbalance. This work is in many ways the sister painting of the magnificent Break-Off, which was painted in the same year and now hangs in Tate Britain. Conceived on an ‘American’ scale, it shares the same expansive framework, the same courage of gesture and the same beautiful balance of colour, between the bright, shiny surfaces of Pop and the more sombre palette of Abstract Expressionism.