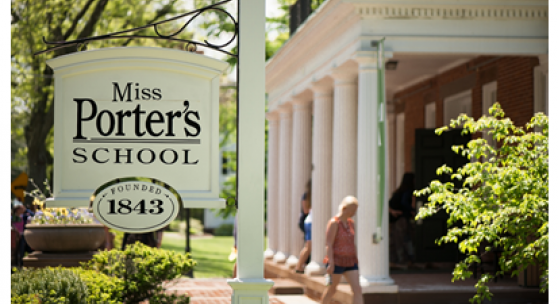 NEW YORK, 19 December 2018 – Miss Porter’s School, the nation’s leading, all-girls private high school, has announced plans for a fundraising initiative, gathering modern and contemporary artworks by more than 25 pioneering female artists to be sold together as the centerpiece of Sotheby’s Contemporary Curated auction on 1 March, 2019. The offering will represent the first-ever all-women benefit auction at a major auction house.

Following the pre-sale exhibition opening in Sotheby’s New York galleries on 22 February, 2019, the works will be auctioned to support financial aid that enables emerging female leaders to attend Miss Porter’s School and go on to shape a changing world. Details on individual works and a full list of artists will be released in early 2019.

Agnes Gund ‘56 and Oprah Winfrey, longtime supporters of Miss Porter’s School, will serve as Honorary Co-Chairs. A Miss Porter’s alumna, Agnes Gund ‘56 is one of the most important patrons of the arts in America and exemplary in her support of women artists. Winfrey is a strong believer in the power of a single-sex education for girls and is the founder of the Oprah Winfrey Leadership Academy for Girls (OWLAG) in South Africa.  The OWLAG Board is chaired by Miss Porter’s Head of School Dr. Katherine Windsor.

Works by more than 25 artists are being donated to the auction, including a major abstract painting by Carmen Herrera, Blanco y Verde of 1966-67 – the most important work by the artist ever to appear at auction. From her breakthrough series of the same name, the painting was recently exhibited in a retrospective of her work, Carmen Herrera: Lines of Sight at the Whitney Museum of American Art in New York.

Head of School Dr. Katherine Windsor explains – “Miss Porter’s School and our alumnae have long championed the important, and often overlooked, contributions of women artists. Miss Porter’s School continues its leadership in this area through this groundbreaking auction of works exclusively created by female artists. We are thrilled to partner with Sotheby’s, as well as Agnes Gund and Oprah Winfrey, who join us in the belief that single-sex education for girls creates future leaders, who understand the challenges of today and who will be the problem solvers of tomorrow.”

Saara Pritchard, Senior Specialist in Sotheby’s Contemporary Art Department in New York commented – “It is a privilege to help bring to life the vision of Miss Porter’s School, Ms. Gund and Ms. Winfrey for an all-women artist auction this spring. Both Ms. Gund and Ms. Winfrey have demonstrated a fierce dedication to the advancement of women’s education worldwide as well as an unwavering patronage of the arts. This wonderful partnership represents a highpoint for the Contemporary Curated series, and it is our privilege to help raise both awareness and funds for this important initiative, through an auction that is only made possible by the incredible generosity of the artists and collectors who have donated works.”

Founded in 1843, Miss Porter’s School is an all-girls private college preparatory school in Farmington, Connecticut. By merging tradition with innovation and creating new generations of bold, informed leaders, Miss Porter's School is positioned to be the school of consequence for girls and women at a time when the voices of our girls need to be amplified. Each year, the school educates more than 300 boarding and day students, and provides more than $4M in need-based financial aid support.

Miss Porter’s achieves the highest standard of education for female students and builds strong relationships between students, faculty and alumnae, thus creating new generations of educated and connected women. To further emphasize the school’s commitment to the arts and focus on experiential learning, advanced students in Miss Porter’s art history program will collaborate directly with Sotheby’s and assist in preparing the auction catalogue.